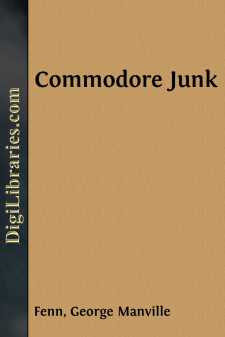 “Then you’re a villain!”

“Reasonable, Captain Armstrong! I am reasonable, and I am telling you the truth. You are a villain!”

“Why, you foolish girl, what did you expect?”

“That you would be an officer and a gentleman. Once more, is it true that you are going to be married to that lady?”

“Then I repeat it, James Armstrong, you are a villain!”

“What nonsense, you fierce-looking, handsome termagant! We have had our little pleasant chats and meetings, and now we’ll say good-bye pleasantly. I can’t help it. I have to marry; so you go and do the same, my dear, and I’ll buy you a handsome wedding-dress.”

“Why, what did you expect?”

“That you were wooing me to be your wife.”

“A captain in the King’s Navy marry the daughter of an old wrecker, the sister of as utter a smuggling scoundrel as can be found about this port of Dartmouth!”

“When a girl gives her heart to the man who comes to her all soft words and smiles, do you think she remembers what he is? It in enough for her that she loves him, and she believes all he says. Oh, James, dear James! forgive me all I’ve said, and don’t send me adrift like this. Tell me it isn’t true.”

“There, that’s enough. You knew as well as I did that there was nothing serious meant, so now let’s bring this meeting to an end.”

“Yes; you had no business to come here. But, as you have come, there are five guineas, Mary, to buy finery; and let’s shake hands and say good-bye.”

Captain Armstrong, a handsome man with a rather cruel-looking, thin-lipped mouth, took five golden pieces from his great, flapped, salt-box-pocketed waistcoat, gave the flowing curls of his wig a shake, and held out the money to the dark, black-eyed woman standing before him with her sun-browned cheeks lightly flushed, her full, red lips quivering, and a look of fierce passion distorting her handsome gipsy countenance, as she held out a well-shaped hand for the money.

“Come, that’s right, Mary,” said the captain. “You are going to be reasonable then. One, two, three, four, five—well, yes, I’ll give you another guinea for being so good—six.”

As he spoke he dropped the golden coins one by one into the woman’s hand, smiled, glanced quickly at a door behind him, and caught her in his arms.

“There, one more kiss from those ripe red lips, and then—”

As sharp a backhanded blow across the face as ever man received from an angry woman, and then, as the recipient involuntarily started back, Mary Dell flung the golden pieces at him, so that one struck him in the chest and the others flew tinkling across the room.

“Curse you!” cried the captain, in a low, savage voice, “this is too much. Leave this house, you low-bred shrew, and if you ever dare to come here again—”