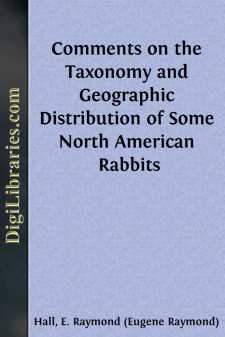 IN preparing maps showing the geographic distribution of North American lagomorphs, some conflicting statements in the literature have led us to examine the pertinent specimens of the Florida cottontail and the Audubon cottontail with results as given below. The study here reported upon was aided by a contract between the Office of Naval Research, Department of the Navy, and the University of Kansas (NR 161–791). Unless otherwise indicated, catalogue numbers are of the United States National Museum and most of the specimens are in the Biological Surveys collection of the Fish and Wildlife Service. Grateful acknowledgment is made to persons in charge of the collections for permission to use the collections under their charge.

Some confusion has existed concerning the subspecific identity of the Florida cottontail in Nebraska because of the way in which Nelson recorded specimens in his "The Rabbits of North America" (N. Amer. Fauna, 29:fig. 11, and pp. 169–174, August 31, 1909). He (op. cit.:174) listed the following specimens under the western subspecies, S. f. similis: Two topotypes (Nos. 87784 and 18738/25532) and of course the type; the specimen (No. 116288) from the Snake River [= Snake Creek of maps], 11 mi. NW Kennedy; two from Neligh (126074 and 151438); and one (probably 18680/25410) from Kennedy. But, he listed (op. cit.:172) under S. f. mearnsi, the eastern subspecies, a specimen (10721) from Brownlee, and two from Kennedy. One of the two from Kennedy probably was the one that is recorded in the files of the U.S. Fish and Wildlife Service as "identified by Cary. spec. in Univ. Nebraska". The other, or third, specimen from Kennedy, we judge, did not exist at all but was recorded by Nelson because a card in the reference file, under Kennedy, Nebraska, in addition to No. 18680/25410, carried a second entry, a number 3471X. The latter is the X-catalogue number of specimen No. 116288 from the Snake River! The X-catalogue is used in place of a field catalogue for specimens sent to the mammal collection of the United States Fish and Wildlife Service, by persons who do not keep regular field numbers of their own. It seems that Nelson prepared (or had prepared) his lists of specimens, at least in part, from cards rather than from the labels on the specimens themselves. Some further confusion as to names that Nelson intended to apply to cottontails in Nebraska resulted from the fact that his map (op. cit.:fig. 11) indicated that the localities mentioned above for S. f. mearnsi were within the geographic range of S. f. similis.

Our comparison of each of the Nebraskan specimens with specimens of S. f. mearnsi in comparable pelage from Iowa and with the type and topotypes of S. f. similis reveals that each of the specimens of which catalogue numbers are given above is clearly referable to Sylvilagus floridanus similis.

Because some mammalogists have suspected that intergradation between Sylvilagus floridanus similis and Sylvilagus nuttallii grangeri occurs along the eastern base of the Rocky Mountains, we have examined specimens which may throw light on this matter.