Comments on the Taxonomic Status of Apodemus peninsulae, with Description of a New Subspecies from North China 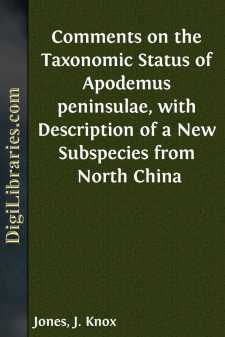 In the past several years the United States National Museum has received a large number of mammals from central and southern Korea through the auspices of the Commission on Hemorrhagic Fever of the Armed Forces Epidemiological Board. Among these Korean collections are more than a hundred specimens of a murine rodent originally described as "Micromys speciosus peninsulae" by Oldfield Thomas but currently placed in the genus Apodemus. In attempting to ascertain the specific relationships of this mouse I have examined, through the generosity of Dr. David H. Johnson, Acting Curator of Mammals, most of the other Oriental specimens of the subgenus Sylvaemus in the U. S. National Museum and it is on this combined material that the following comments and description are based.

Three general groups of the genus Apodemus are presently known to occur on the mainland of northeast Asia. One is the distinctive Apodemus agrarius, lone representative of the subgenus Apodemus. The others, both in the subgenus Sylvaemus and closely resembling each other, are represented by a small animal that is currently regarded as conspecific with Apodemus sylvaticus and a larger animal of which the Korean mouse, peninsulae, is representative. The oldest trivial name applied to the large Sylvaemus is major of Radde, 1862, in the combination [Mus sylvaticus] vrt. major. This is, however, twice preoccupied (see Ellerman and Morrison-Scott, 1951:566). The next available name is peninsulae of Thomas, 1907, which was applied to mice from central and southern Korea (type from Mun'gyong, 110 mi. SE Seoul, Korea), and was originally proposed as a subspecies of the insular Japanese species, Apodemus speciosus. G. M. Allen (1940:949), who recognized peninsulae as a monotypic species, was the first investigator to make the important distinction that it was not conspecific with the Japanese speciosus, although Hollister (1913:1-2) and Miller (1914:89) had previously used the combination Apodemus peninsulae, evidently with the same thought in mind.

More recently, Ellerman (1949:32) and Ellerman and Morrison-Scott (1951:566) have arranged peninsulae as a subspecies of Apodemus flavicollis under the assumption that all the members of the subgenus Sylvaemus on the eastern Asiatic mainland are subspecies of one or another of the species of western Europe, A. flavicollis or A. sylvaticus. Ellerman (in Ellerman and Morrison-Scott, 1951:564) states: "The majority of the forms I distribute in a somewhat arbitrary manner between sylvaticus, average smaller skull, and flavicollis, average larger skull; occurring together nearly throughout the Palaearctic. I feel fairly sure that there are some errors of judgment in my arrangement, and equally sure that there is no other way to define species in this very large and difficult group." I have compared the specimens of peninsulae available to me from central and southern Korea with specimens of A....