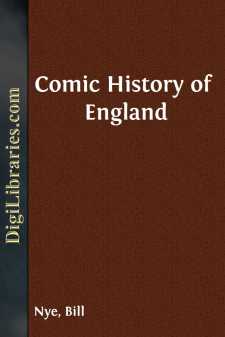 CHAPTER I. INVASION OF CAESAR: THE DISCOVERY OF TIN AND CONSEQUENT ENLIGHTENMENT OF BRITAIN.

From the glad whinny of the first unicorn down to the tip end of the nineteenth century, the history of Great Britain has been dear to her descendants in every land, 'neath every sky.

But to write a truthful and honest history of any country the historian should, that he may avoid overpraise and silly and mawkish sentiment, reside in a foreign country, or be so situated that he may put on a false moustache and get away as soon as the advance copies have been sent to the printers.

The writer of these pages, though of British descent, will, in what he may say, guard carefully against permitting that fact to swerve him for one swift moment from the right.

England even before Christ, as now, was a sort of money centre, and thither came the Phoenicians and the Carthaginians for their tin.

[Illustration: THE DISCOVERY OF TIN IN BRITAIN.]

These early Britons were suitable only to act as ancestors. Aside from that, they had no good points. They dwelt in mud huts thatched with straw. They had no currency and no ventilation,—no drafts, in other words. Their boats were made of wicker-work plastered with clay. Their swords were made of tin alloyed with copper, and after a brief skirmish, the entire army had to fall back and straighten its blades.

They also had short spears made with a rawhide string attached, so that the deadly weapon could be jerked back again. To spear an enemy with one of these harpoons, and then, after playing him for half an hour or so, to land him and finish him up with a tin sword, constituted one of the most reliable boons peculiar to that strange people.

[Illustration: CAESAR TREATING WITH THE BRITONS.]

Caesar first came to Great Britain on account of a bilious attack. On the way across the channel a violent storm came up. The great emperor and pantata believed he was drowning, so that in an instant's time everything throughout his whole lifetime recurred to him as he went down,—especially his breakfast.

Purchasing a four-in-hand of docked unicorns, and much improved in health, he returned to Rome.

Agriculture had a pretty hard start among these people, and where now the glorious fields of splendid pale and billowy oatmeal may be seen interspersed with every kind of domestic and imported fertilizer in cunning little hillocks just bursting forth into fragrance by the roadside, then the vast island was a quaking swamp or covered by impervious forests of gigantic trees, up which with coarse and shameless glee would scamper the nobility.

(Excuse the rhythm into which I may now and then drop as the plot develops.—AUTHOR.)

Caesar later on made more invasions: one of them for the purpose of returning his team and flogging a Druid with whom he had disagreed religiously on a former trip. (He had also bought his team of the Druid.)

The Druids were the sheriffs, priests, judges, chiefs of police, plumbers, and justices of the peace....