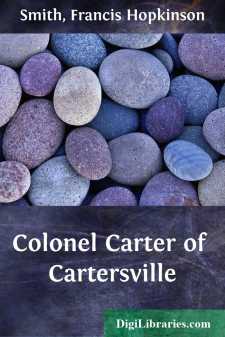 The Colonel's House in Bedford Place

The dinner was at the colonel's—an old-fashioned, partly furnished, two-story house nearly a century old which crouches down behind a larger and more modern dwelling fronting on Bedford Place within a stone's throw of the tall clock tower of Jefferson Market.

The street entrance to this curious abode is marked by a swinging wooden gate opening into a narrow tunnel which dodges under the front house. It is an uncanny sort of passageway, mouldy and wet from a long-neglected leak overhead, and is lighted at night by a rusty lantern with dingy glass sides.

On sunny days this gruesome tunnel frames from the street a delightful picture of a bit of the yard beyond, with the quaint colonial door and its three steps let down in a welcoming way.

Its retired location and shabby entrance brought it quite within the colonel's income, and as the rent was not payable in advance, and the landlord patient, he had surrounded himself not only with all the comforts but with many of the luxuries of a more pretentious home. In this he was assisted by his negro servant Chad,—an abbreviation of Nebuchadnezzar,—who was chambermaid, cook, butler, body-servant, and boots, and who by his marvelous tales of the magnificence of "de old fambly place in Caartersville" had established a credit among the shopkeepers on the avenue which would have been denied a much more solvent customer.

To this hospitable retreat I wended my way in obedience to one of the colonel's characteristic notes:—

Everything is booming—Fitz says the scheme will take like the measles—dinner tomorrow at six—don't be late.

The colonel had written several similar notes that week,—I lived but a few streets away,—all on the spur of the moment, and all expressive of his varying moods and wants; the former suggested by his unbounded enthusiasm over his new railroad scheme, and the latter by such requests as these: "Will you lend me half a dozen napkins—mine are all in the wash, and I want enough to carry me over Sunday. Chad will bring, with your permission, the extra pair of andirons you spoke of." Or, "Kindly hand Chad the two magazines and a corkscrew."

Of course Chad always tucked them under his arm, and carried them away, for nobody ever refused the colonel anything—nobody who loved him. As for himself, he would have been equally generous in return, and have emptied his house, and even his pocketbook, in my behalf, had that latter receptacle been capable of further effort. Should this have been temporarily overstrained,—and it generally was,—he would have promptly borrowed the amount of the nearest friend, and then have rubbed his hands and glowed all day with delight at being able to relieve my necessity.

"I am a Virginian, suh. Command me," was his way of putting it.

So to-night I pushed open the swinging door, felt my way along the dark passage, and crossed the small yard choked with snow at the precise minute when the two hands of the great clock in the tall tower pointed to six....