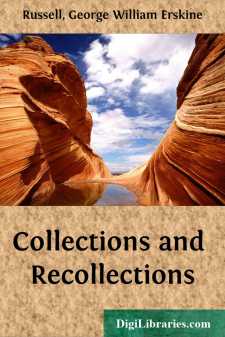 I. LINKS WITH THE PAST.

Of the celebrated Mrs. Disraeli her husband is reported to have said, "She is an excellent creature, but she never can remember which came first, the Greeks or the Romans." In my walk through life I have constantly found myself among excellent creatures of this sort. The world is full of vague people, and in the average man, and still more in the average woman, the chronological sense seems to be entirely wanting. Thus, when I have occasionally stated in a mixed company that my first distinct recollection was the burning of Covent Garden Theatre, I have seen a general expression of surprised interest, and have been told, in a tone meant to be kind and complimentary, that my hearers would hardly have thought that my memory went back so far. The explanation has been that these excellent creatures had some vague notions of Rejected Addresses floating in their minds, and confounded the burning of Covent Garden Theatre in 1856 with that of Drury Lane Theatre in 1809. It was pleasant to feel that one bore one's years so well as to make the error possible.

But events, however striking, are only landmarks in memory. They are isolated and detached, and begin and end in themselves. The real interest of one's early life is in its Links with the Past, through the old people whom one has known. Though I place my first distinct recollection in 1856, I have memories more or less hazy of an earlier date.

There was an old Lady Robert Seymour, who lived in Portland Place, and died there in 1855, in her ninety-first year. Probably she is my most direct link with the past, for she carried down to the time of the Crimean War the habits and phraseology of Queen Charlotte's early Court. "Goold" of course she said for gold, and "yaller" for yellow, and "laylock" for lilac. She laid the stress on the second syllable of "balcony." She called her maid her "'ooman;" instead of sleeping at a place, she "lay" there, and when she consulted the doctor she spoke of having "used the 'potticary."

There still lives, in full possession of all her faculties, a venerable lady who can say that her husband was born at Boston when America was a British dependency. This is the widow of Lord Chancellor Lyndhurst, who was born in 1772, and helped to defeat Mr. Gladstone's Paper Bill in the House of Lords on his eighty-eighth birthday. He died in 1862.

A conspicuous figure in my early recollections is Sir Henry Holland, M.D., father of the present Lord Knutsford. He was born in 1788, and died in 1873. The stories of his superhuman vigour and activity would fill a volume. In 1863 Bishop Wilberforce wrote to a friend abroad: "Sir Henry Holland, who got back safe from all his American rambles, has been taken by Palmerston through the river at Broadlands, and lies very ill." However, he completely threw off the effects of this mischance, and survived his aquaceous host for some eight years. I well remember his telling me in 1868 that his first famous patient was the mysterious "Pamela," who became the wife of the Irish patriot, Lord Edward FitzGerald.

Every one who went about in London in the 'seventies will remember the dyed locks and crimson velvet waistcoat of William, fifth Earl Bathurst, who was born in 1791 and died in 1878. He told me that he was at a private school at Sunbury-on-Thames with William and John Russell, the latter of whom became the author of the Reform Bill and Prime Minister. At this delightful seminary, the peers' sons, including my informant, who was then the Hon. William Bathurst, had a bench to themselves. William and John Russell were not peers' sons, as their father had not then succeeded to the Dukedom of Bedford. In 1802 he succeeded, on the sudden death of his elder brother, and became sixth Duke of Bedford; and his sons, becoming Lord William and Lord John, were duly promoted to the privileged bench. Nothing in Pelham or Vivian Grey quite equals this.

When I went to Harrow, in 1868, there was an old woman, by name Polly Arnold, still keeping a stationer's shop in the town, who had sold cribs to Byron when he was a Harrow boy; and Byron's fag, a funny old gentleman in a brown wig—called Baron Heath—was a standing dish on our school Speech-Day....