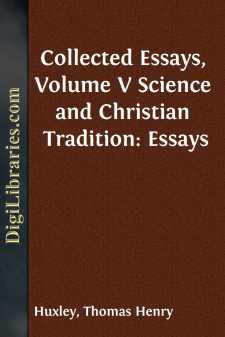 Most of the Essays comprised in the present volume have been written during the last six or seven years, without premeditated purpose or intentional connection, in reply to attacks upon doctrines which I hold to be well founded; or in refutation of allegations respecting matters lying within the province of natural knowledge, which I believe to be erroneous; and they bear the mark of their origin in the controversial tone which pervades them.

Of polemical writing, as of other kinds of warfare, I think it may be said, that it is often useful, sometimes necessary, and always more or less of an evil. It is useful, when it attracts attention to topics which might otherwise be neglected; and when, as does sometimes happen, those who come to see a contest remain to think. It is necessary, when the interests of truth and of justice are at stake. It is an evil, in so far as controversy always tends to degenerate into quarrelling, to swerve from the great issue of what is right and what is wrong to the very small question of who is right and who is wrong. I venture to hope that the useful and the necessary were more conspicuous than the evil attributes of literary militancy, when these papers were first published; but I have had some hesitation about reprinting them. If I may judge by my own taste, few literary dishes are less appetising than cold controversy; moreover, there is an air of unfairness about the presentation of only one side of a discussion, and a flavour of unkindness in the reproduction of "winged words," which, however appropriate at the time of their utterance, would find a still more appropriate place in oblivion. Yet, since I could hardly ask those who have honoured me by their polemical attentions to confer lustre on this collection, by permitting me to present their lucubrations along with my own; and since it would be a manifest wrong to them to deprive their, by no means rare, vivacities of language of such justification as they may derive from similar freedoms on my part; I came to the conclusion that my best course was to leave the essays just as they were written; assuring my honourable adversaries that any heat of which signs may remain was generated, in accordance with the law of the conservation of energy, by the force of their own blows, and has long since been dissipated into space.

But, however the polemical coincomitants of these discussions may be regarded—or better, disregarded—there is no doubt either about the importance of the topics of which they treat, or as to the public interest in the "Controverted Questions" with which they deal. Or rather, the Controverted Question; for disconnected as these pieces may, perhaps, appear to be, they are, in fact, concerned only with different aspects of a single problem, with which thinking men have been occupied, ever since they began seriously to consider the wonderful frame of things in which their lives are set, and to seek for trustworthy guidance among its intricacies.

Experience speedily taught them that the shifting scenes of the world's stage have a permanent background; that there is order amidst the seeming confusion, and that many events take place according to unchanging rules. To this region of familiar steadiness and customary regularity they gave the name of Nature. But, at the same time, their infantile and untutored reason, little more, as yet, than the playfellow of the imagination, led them to believe that this tangible, commonplace, orderly world of Nature was surrounded and interpenetrated by another intangible and mysterious world, no more bound by fixed rules than, as they fancied, were the thoughts and passions which coursed through their minds and seemed to exercise an intermittent and capricious rule over their bodies. They attributed to the entities, with which they peopled this dim and dreadful region, an unlimited amount of that power of modifying the course of events of which they themselves possessed a small share, and thus came to regard them as not merely beyond, but above, Nature.

Hence arose the conception of a "Supernature" antithetic to "Nature"—the primitive dualism of a natural world "fixed in fate" and a supernatural, left to the free play of volition—which has pervaded all later speculation and, for thousands of years, has exercised a profound influence on practice. For it is obvious that, on this theory of the Universe, the successful conduct of life must demand careful attention to both worlds; and, if either is to be neglected, it may be safer that it should be Nature. In any given contingency, it must doubtless be desirable to know what may be expected to happen in the ordinary course of things; but it must be quite as necessary to have some inkling of the line likely to be taken by supernatural agencies able, and possibly willing, to suspend or reverse that course. Indeed, logically developed, the dualistic theory must needs end in almost exclusive attention to Supernature, and in trust that its overruling strength will be exerted in favour of those who stand well with its denizens. On the other hand, the lessons of the great schoolmaster, experience, have hardly seemed to accord with this conclusion....