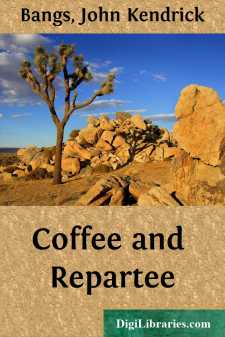 The guests at Mrs. Smithers's high-class boarding-house for gentlemen had assembled as usual for breakfast, and in a few moments Mary, the dainty waitress, entered with the steaming coffee, the mush, and the rolls.

The School-master, who, by-the-way, was suspected by Mrs. Smithers of having intentions, and who for that reason occupied the chair nearest the lady's heart, folded up the morning paper, and placing it under him so that no one else could get it, observed, quite genially for him, "It was very wet yesterday."

"I didn't find it so," observed a young man seated half-way down the table, who was by common consent called the Idiot, because of his "views." "In fact, I was very dry. Curious thing, I'm always dry on rainy days. I am one of the kind of men who know that it is the part of wisdom to stay in when it rains, or to carry an umbrella when it is not possible to stay at home, or, having no home, like ourselves, to remain cooped up in stalls, or stalled up in coops, as you may prefer."

"You carried an umbrella, then?" queried the landlady, ignoring the Idiot's shaft at the size of her "elegant and airy apartments" with an ease born of experience.

"Yes, madame," returned the Idiot, quite unconscious of what was coming.

"Whose?" queried the lady, a sarcastic smile playing about her lips.

"That I cannot say, Mrs. Smithers," replied the Idiot, serenely, "but it is the one you usually carry."

"Your insinuation, sir," said the School-master, coming to the landlady's rescue, "is an unworthy one. The umbrella in question is mine. It has been in my possession for five years."

"Then," replied the Idiot, unabashed, "it is time you returned it. Don't you think men's morals are rather lax in this matter of umbrellas, Mr. Whitechoker?" he added, turning from the School-master, who began to show signs of irritation.

"Very," said the Minister, running his finger about his neck to make the collar which had been sent home from the laundry by mistake set more easily—"very lax. At the last Conference I attended, some person, forgetting his high office as a minister in the Church, walked off with my umbrella without so much as a thank you; and it was embarrassing too, because the rain was coming down in bucketfuls."

"What did you do?" asked the landlady, sympathetically. She liked Mr. Whitechoker's sermons, and, beyond this, he was a more profitable boarder than any of the others, remaining home to luncheon every day and having to pay extra therefor.

"There was but one thing left for me to do. I took the bishop's umbrella," said Mr. Whitechoker, blushing slightly.

"But you returned it, of course?" said the Idiot.

"I intended to, but I left it on the train on my way back home the next day," replied the clergyman, visibly embarrassed by the Idiot's unexpected cross-examination.

"It's the same way with books," put in the Bibliomaniac, an unfortunate being whose love of rare first editions had brought him down from affluence to boarding. "Many a man who wouldn't steal a dollar would run off with a book. I had a friend once who had a rare copy of Through Africa by Daylight. It was a beautiful book. Only twenty-five copies printed. The margins of the pages were four inches wide, and the title-page was rubricated; the frontispiece was colored by hand, and the seventeenth page had one of the most amusing typographical errors on it—"

"Was there any reading-matter in the book?" queried the Idiot, blowing softly on a hot potato that was nicely balanced on the end of his fork.

"Yes, a little; but it didn't amount to much," returned the Bibliomaniac. "But, you know, it isn't as reading-matter that men like myself care for books....