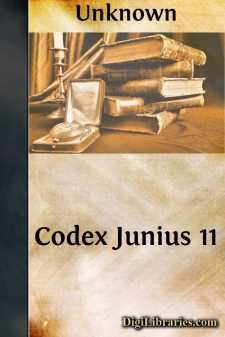 (ll. 1-28) Right is it that we praise the King of heaven, the Lord of hosts, and love Him with all our hearts. For He is great in power, the Source of all created things, the Lord Almighty. Never hath He known beginning, neither cometh an end of His eternal glory. Ever in majesty He reigneth over celestial thrones; in righteousness and strength He keepeth the courts of heaven which were established, broad and ample, by the might of God, for angel dwellers, wardens of the soul. The angel legions knew the blessedness of God, celestial joy and bliss. Great was their glory! The mighty spirits magnified their Prince and sang His praise with gladness, serving the Lord of life, exceeding blessed in His splendour. They knew no sin nor any evil; but dwelt in peace for ever with their Lord. They wrought no deed in heaven save right and truth, until the angel prince in pride walked in the ways of error. Then no longer would they work their own advantage, but turned away from the love of God. They boasted greatly, in their banded strength, that they could share with God His glorious dwelling, spacious and heavenly bright.

(ll. 28-46) Then sorrow came upon them, envy and insolence and pride of the angel who first began that deed of folly, to plot and hatch it forth, and, thirsting for battle, boasted that in the northern borders of heaven he would establish a throne and a kingdom. Then was God angered and wrathful against that host which He had crowned before with radiance and glory. For the traitors, to reward their work, He shaped a house of pain and grim affliction, and lamentations of hell. Our Lord prepared this torture-house of exiles, deep and joyless, for the coming of the angel hosts. Well He knew it lay enshrouded in eternal night, and filled with woe, wrapped in fire and piercing cold, smoke-veils and ruddy flame. And over that wretched realm He spread the brooding terror of torment. They had wrought grievous wrong together against God. Grim the reward they gained!

(ll. 47-77) Fierce of heart, they boasted they would take the kingdom, and easily. But their hope failed them when the Lord, High King of heaven, lifted His hand against their host. The erring spirits, in their sin, might not prevail against the Lord, but God, the Mighty, in His wrath, smote their insolence and broke their pride, bereft these impious souls of victory and power and dominion and glory; despoiled His foes of bliss and peace and joy and radiant grace, and mightily avenged His wrath upon them to their destruction. His heart was hardened against them; with heavy hand He crushed His foes, subdued them to His will, and, in His wrath, drove out the rebels from their ancient home and seats of glory. Our Lord expelled and banished out of heaven the presumptuous angel host. All-wielding God dismissed the faithless horde, a hostile band of woeful spirits, upon a long, long journey. Crushed was their pride, their boasting humbled, their power broken, their glory dimmed. Thenceforth those dusky spirits dwelt in exile....