"Co. Aytch" Maury Grays, First Tennessee Regiment or, A Side Show of the Big Show 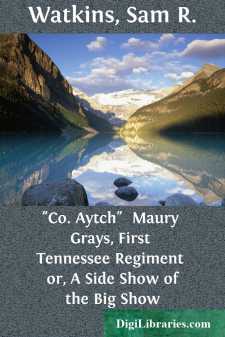 CHAPTER I RETROSPECTIVE "WE ARE ONE AND UNDIVIDED"

About twenty years ago, I think it was—I won't be certain, though— a man whose name, if I remember correctly, was Wm. L. Yancy—I write only from memory, and this was a long time ago—took a strange and peculiar notion that the sun rose in the east and set in the west, and that the compass pointed north and south. Now, everybody knew at the time that it was but the idiosyncrasy of an unbalanced mind, and that the United States of America had no north, no south, no east, no west. Well, he began to preach the strange doctrine of there being such a thing. He began to have followers. As you know, it matters not how absurd, ridiculous and preposterous doctrines may be preached, there will be some followers. Well, one man by the name of (I think it was) Rhett, said it out loud. He was told to "s-h-e-e." Then another fellow by the name (I remember this one because it sounded like a graveyard) Toombs said so, and he was told to "sh-sh-ee-ee." Then after a while whole heaps of people began to say that they thought that there was a north and a south; and after a while hundreds and thousands and millions said that there was a south. But they were the persons who lived in the direction that the water courses run. Now, the people who lived where the water courses started from came down to see about it, and they said, "Gents, you are very much mistaken. We came over in the Mayflower, and we used to burn witches for saying that the sun rose in the east and set in the west, because the sun neither rises nor sets, the earth simply turns on its axis, and we know, because we are Pure(i)tans." The spokesman of the party was named (I think I remember his name because it always gave me the blues when I heard it) Horrors Greeley; and another person by the name of Charles Sumner, said there ain't any north or south, east or west, and you shan't say so, either. Now, the other people who lived in the direction that the water courses run, just raised their bristles and continued saying that there is a north and there is a south. When those at the head of the water courses come out furiously mad, to coerce those in the direction that water courses run, and to make them take it back. Well, they went to gouging and biting, to pulling and scratching at a furious rate. One side elected a captain by the name of Jeff Davis, and known as one-eyed Jeff, and a first lieutenant by the name of Aleck Stephens, commonly styled Smart Aleck. The other side selected as captain a son of Nancy Hanks, of Bowling Green, and a son of old Bob Lincoln, the rail-splitter, and whose name was Abe. Well, after he was elected captain, they elected as first lieutenant an individual of doubtful blood by the name of Hannibal Hamlin, being a descendant of the generation of Ham, the bad son of old Noah, who meant to curse him blue, but overdid the thing, and cursed him black.

Well, as I said before, they went to fighting, but old Abe's side got the best of the argument....