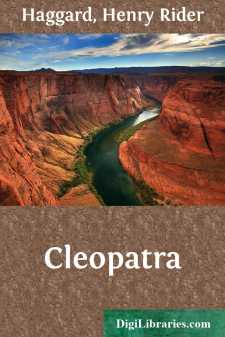 The history of the ruin of Antony and Cleopatra must have struck many students of the records of their age as one of the most inexplicable of tragic tales. What malign influence and secret hates were at work, continually sapping their prosperity and blinding their judgment? Why did Cleopatra fly at Actium, and why did Antony follow her, leaving his fleet and army to destruction? An attempt is made in this romance to suggest a possible answer to these and some other questions.

The reader is asked to bear in mind, however, that the story is told, not from the modern point of view, but as from the broken heart and with the lips of an Egyptian patriot of royal blood; no mere beast-worshipper, but a priest instructed in the inmost mysteries, who believed firmly in the personal existence of the gods of Khem, in the possibility of communion with them, and in the certainty of immortal life with its rewards and punishments; to whom also the bewildering and often gross symbolism of the Osirian Faith was nothing but a veil woven to obscure secrets of the Sanctuary. Whatever proportion of truth there may have been in their spiritual claims and imaginings, if indeed there was any, such men as the Prince Harmachis have been told of in the annals of every great religion, and, as is shown by the testimony of monumental and sacred inscriptions, they were not unknown among the worshippers of the Egyptian Gods, and more especially of Isis.

Unfortunately it is scarcely possible to write a book of this nature and period without introducing a certain amount of illustrative matter, for by no other means can the long dead past be made to live again before the reader's eyes with all its accessories of faded pomp and forgotten mystery. To such students as seek a story only, and are not interested in the faith, ceremonies, or customs of the Mother of Religion and Civilisation, ancient Egypt, it is, however, respectfully suggested that they should exercise the art of skipping, and open this tale at its Second Book.

That version of the death of Cleopatra has been preferred which attributes her end to poison. According to Plutarch its actual manner is very uncertain, though popular rumour ascribed it to the bite of an asp. She seems, however, to have carried out her design under the advice of that shadowy personage, her physician, Olympus, and it is more than doubtful if he would have resorted to such a fantastic and uncertain method of destroying life.

It may be mentioned that so late as the reign of Ptolemy Epiphanes, pretenders of native blood, one of whom was named Harmachis, are known to have advanced their claims to the throne of Egypt. Moreover, there was a book of prophecy current among the priesthood which declared that after the nations of the Greeks the God Harsefi would create the "chief who is to come." It will therefore be seen that, although it lacks historical confirmation, the story of the great plot formed to stamp out the dynasty of the Macedonian Lagidae and place Harmachis on the throne is not in itself improbable. Indeed, it is possible that many such plots were entered into by Egyptian patriots during the long ages of their country's bondage. But ancient history tells us little of the abortive struggles of a fallen race.

The Chant of Isis and the Song of Cleopatra, which appear in these pages, are done into verse from the writer's prose by Mr. Andrew Lang, and the dirge sung by Charmion is translated by the same hand from the Greek of the Syrian Meleager.