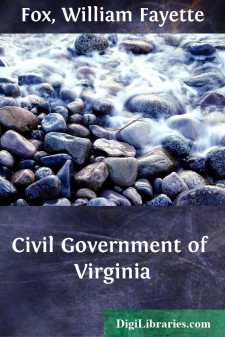 The word GOVERNMENT means guidance or direction or management. It means also the person or persons who rule or control any establishment or institution. Wherever any number of people live together in one house, or one town, or city, or country, there must be government of some kind.

In the family the parents are the government. They guide and manage the affairs of the house. They give orders to their children as to what they must do and what they must not do, and they see that their orders are obeyed. This is government, and it is for the benefit of the family. If the children were to do as they please, there would be no peace or happiness in the home.

And in their games and amusements out of doors children find that they must not do as they please. Every game has certain rules or laws which those who take part in it are required to obey. In the game of baseball, for example, the players are not allowed to act as they like. There are rules of the play, and there is an umpire to see that the rules are observed.

In the school, too, and in all business establishments there must be government. The teachers direct the work in their classes, giving orders to the pupils as to what lessons they must study and how they must study them. In the store and factory there is a manager or master who directs the business. If there were no managers or masters there would be nothing but disorder and confusion.

We can see therefore how necessary government is, and we can understand why it is that there must be government in the country or state in which we live. There must be laws to direct men how they must behave towards one another and to punish those who do wrong. And there must be people to make the laws and people to see that they are carried out.

This is CIVIL GOVERNMENT. The word CIVIL means pertaining to the state, or to the relations between citizens and the state, and the word STATE means the whole community or body of people living under one government.

The government in a republic is usually divided into three parts or DEPARTMENTS. One department makes the laws. This is called the LEGISLATIVE DEPARTMENT or the legislature. It is formed of a certain number of persons who are elected at certain times, by the people, and who meet to make laws that are necessary for the good of the state or country.

The second department of government is called the EXECUTIVE DEPARTMENT, and is also formed of persons who are elected by the people, and their business is to execute or carry out the laws. Their duty is to see that every one who violates any law of the country or state is brought to punishment, and that the laws made for promoting the well-being and happiness of the people are carried out.

The third department of the government is the JUDICIAL DEPARTMENT or the judiciary....