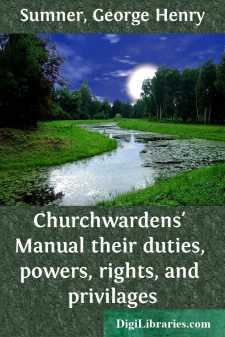 The Duties of Churchwardens.

I am so constantly asked in the course of my inspection of the Churches in the Archdeaconry of Winchester what are the duties and responsibilities of Churchwardens, that I have thought it might be useful to publish the following remarks, which were in substance delivered in my charge to the Clergy and Churchwardens of the Archdeaconry of Winchester in the Spring of 1889.  Many requests were then made to me that I would publish my charge as a manual for Churchwardens, and it is in consequence of those requests that this publication has been put forth.

Let me first refer to the origin of the office.  The name appears in connection with the ecclesiastical history of the fourth century.  St. Augustine refers to certain officers in the Church called seniores Ecclesiastici.  These officers were not ordained persons, but yet had some concern in the care of the Church.  They were entrusted with the treasure and management of the outward affairs of the Church.  These persons may be looked upon as the ecclesiastical ancestors of our present race of Churchwardens.   In Lyndwood’s Provinciale there are allusions in some of the Provincial Constitutions of the fourteenth and fifteenth Centuries which seem to point to officers in connection with the Church corresponding to our present Churchwardens.  It is not, however, until after the Reformation that we find their duties distinctly defined in successive Canons, as in 1571 (Cardwell’s Synodalia, I, 122), in 1597 (Cardwell’s Synodalia, I, 160), and in our own Canons of 1603.

It is not desirable on the present occasion to trace the variations in the duties of Churchwardens through successive centuries.  Each age has, of course, its own special features, and may require different treatment to its predecessor, but there is no doubt whatever as to the fact that ever since the Reformation Churchwardens have been recognised as officers of the Church, with their position and duties distinctly defined both by canon and statute law.  Before particularising their duties I must point out what is the law as to their election.

Who, then are qualified to be Churchwardens?

Aliens, Roman Catholics, Jews, children under ten years of age, and persons who have been convicted of felony are absolutely disqualified.

The following cannot be compelled to serve the office if they personally object to do so:

Peers, Sheriffs, Clergymen, Members of the House of Commons, Magistrates, Barristers and Solicitors, Physicians and Surgeons, Dissenting Ministers, Officers in the Navy or Army on full pay, men in the Militia or Army Reserve, Registrars of Births, Deaths, and Marriages, Officials of the Customs, Excise, or Post Office, and those already acting as Churchwardens elsewhere.

With these exceptions the law of the land is that, if a householder dwelling in the parish be legally elected to the office, he must serve as Churchwarden.  In old parishes dissenters, if elected, may appoint a deputy to be approved of by the Vestry.   But in parishes formed under the Acts 1 and 2, Will. IV, c. 38, sec. 16; 6 and 7 Vict., c. 37, sec. 17; or 19 and 20 Vict., c. 104, which re-enacts 6 and 7 Vict., c. 37, sec. 17, with reference to this point, it is expressly en-acted that Churchwardens must be Churchmen.  Churchwardens ought to be elected in new parishes twenty-one days after the consecration of the Church thereof.

Females, although there has been no legal decision authorising their appointment, are occasionally, if otherwise eligible, appointed to serve the office, but it is not likely that the Courts, if called upon, would be so ungallant as to compel a female householder, if elected, to serve against her will....