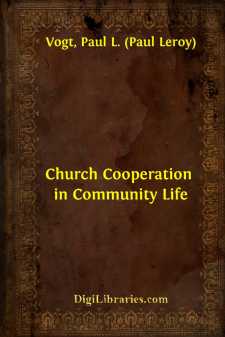 Many books have been written during the past few years on the rural church. Some of these have given excellent concrete illustrations of methods that are proving successful in solving local problems. Others have discussed the general rural church situation. The rural life movement, however, has been so rapid that it is believed that a brief restatement of the place of the church in the rural life movement is desirable at the present time.

It has been the task and privilege of the writer for the past four years to be almost constantly in the field traveling from the Atlantic to the Pacific and from Canadian border to the limits of Florida and getting so far as possible first-hand impressions of rural church and community conditions. It is the purpose of the present essay to discuss some of the general problems in rural life presenting themselves to the religious forces of America, and to note some conclusions as to the next steps to be taken if these forces are to render the service in rural advance that it is believed is theirs to render. Suggestions as to local programs will be made only as evidence that when the church undertakes in an adequate manner the solution of problems whose solution is demanded of it, it receives both the moral and the financial support of the people served. The chapters on phases of the local program are intended only to help in preparing the way for the larger service contemplated.

As with individuals, so it is with institutions. It is difficult to discuss the place of different organizations in the rural life movement without arousing the antagonism of leaders in the respective organizations. It is hoped that the point of view held will be accepted as one of sympathy for the efforts of all organizations concerned and that the purpose of the discussion is to point the way toward a larger cooperation resulting from a better understanding of the work that may be expected of each.

When one begins to discuss a subject it helps very much if his readers know what he has in mind in the terms used. In the title selected for this text there are at least three words that need definition. Probably no reader will agree fully with any of the definitions given, but an attempt to define should at least help the reader to understand better in what sense the terms are used by the writer.

The term "community" has come into such common use that it might be assumed that definition is unnecessary. And yet when learned bodies get together to discuss community problems a large part of the time is usually taken up in attempting to define what the different speakers are talking about.

When the writer lived in the open country several years ago he went to Mifflin Center school and attended Wesley Chapel church. The schoolhouse and the church were located at the same crossroads, and these two institutions drew for their constituency from an area of about four square miles for the school and a somewhat larger area for the church. Brownstown school, to the south, Hendrickson's to the east, and Whetstone to the west made up other school communities. Pleasant Grove church, Salem, and Brownstown, with a different territory covered by each, made up church areas that did not coincide with the school areas bounding Mifflin Center school territory. In like manner, when trading was to be done, Upper Sandusky and Kirby, five and six miles away, were the centers to which everybody went, generally on Saturday afternoon, when friends from other sections of the county might be found on the streets. The boundaries of the trade center were thus much larger than those of either the school or the church. In politics, the center of interest of the particular township with which the writer was concerned was the old schoolhouse turned into a township house at Mifflin Center, the location of the church and school....