Chronicles of the Canongate 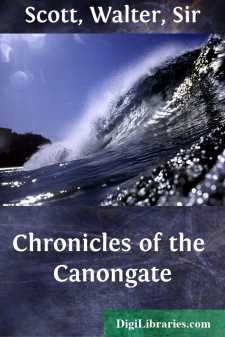 INTRODUCTION TO CHRONICLES OF THE CANONGATE.

The preceding volume of this Collection concluded the last of the pieces originally published under the NOMINIS UMBRA of The Author of Waverley; and the circumstances which rendered it impossible for the writer to continue longer in the possession of his incognito were communicated in 1827, in the Introduction to the first series of Chronicles of the Canongate, consisting (besides a biographical sketch of the imaginary chronicler) of three tales, entitled "The Highland Widow," "The Two Drovers," and "The Surgeon's Daughter." In the present volume the two first named of these pieces are included, together with three detached stories which appeared the year after, in the elegant compilation called "The Keepsake." "The Surgeon's Daughter" it is thought better to defer until a succeeding volume, than to

"Begin, and break off in the middle."

I have, perhaps, said enough on former occasions of the misfortunes which led to the dropping of that mask under which I had, for a long series of years, enjoyed so large a portion of public favour. Through the success of those literary efforts, I had been enabled to indulge most of the tastes which a retired person of my station might be supposed to entertain. In the pen of this nameless romancer, I seemed to possess something like the secret fountain of coined gold and pearls vouchsafed to the traveller of the Eastern Tale; and no doubt believed that I might venture, without silly imprudence, to extend my personal expenditure considerably beyond what I should have thought of, had my means been limited to the competence which I derived from inheritance, with the moderate income of a professional situation. I bought, and built, and planted, and was considered by myself, as by the rest of the world, in the safe possession of an easy fortune. My riches, however, like the other riches of this world, were liable to accidents, under which they were ultimately destined to make unto themselves wings, and fly away. The year 1825, so disastrous to many branches of industry and commerce, did not spare the market of literature; and the sudden ruin that fell on so many of the booksellers could scarcely have been expected to leave unscathed one whose career had of necessity connected him deeply and extensively with the pecuniary transactions of that profession. In a word, almost without one note of premonition, I found myself involved in the sweeping catastrophe of the unhappy time, and called on to meet the demands of creditors upon commercial establishments with which my fortunes had long been bound up, to the extent of no less a sum than one hundred and twenty thousand pounds.

The author having, however rashly, committed his pledges thus largely to the hazards of trading companies, it behoved him, of course, to abide the consequences of his conduct, and, with whatever feelings, he surrendered on the instant every shred of property which he had been accustomed to call his own. It became vested in the hands of gentlemen whose integrity, prudence, and intelligence were combined with all possible liberality and kindness of disposition, and who readily afforded every assistance towards the execution of plans, in the success of which the author contemplated the possibility of his ultimate extrication, and which were of such a nature that, had assistance of this sort been withheld, he could have had little prospect of carrying them into effect....