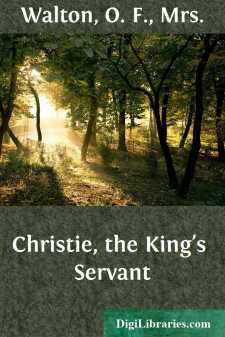 It was the yellow ragwort that did it! I have discovered the clue at last. All night long I have been dreaming of Runswick Bay. I have been climbing the rocks, talking to the fishermen, picking my way over the masses of slippery seaweed, and breathing the fresh briny air. And all the morning I have been saying to myself, 'What can have made me dream of Runswick Bay? What can have brought the events of my short stay in that quaint little place so vividly before me?' Yes, I am convinced of it; it was that bunch of yellow ragwort on the mantelpiece in my bedroom. My little Ella gathered it in the lane behind the house yesterday morning, and brought it in triumphantly, and seized the best china vase in the drawing-room, and filled it with water at the tap, and thrust the great yellow bunch into it.

'Oh, Ella,' said Florence, her elder sister, 'what ugly common flowers! How could you put them in mother's best vase, that Aunt Alice gave her on her birthday! What a silly child you are!'

'I'm not a silly child,' aid Ella stoutly, 'and mother is sure to like them; I know she will. She won't call them common flowers. She loves all yellow flowers. She said so when I brought her the daffodils; and these are yellower, ever so much yellower.'

Her mother came in at this moment, and, taking our little girl on her knee, she told her that she was quite right; they were very beautiful in her eyes, and she would put them at once in her own room, where she could have them all to herself.

And that is how it came about, that, as I lay in bed, the last thing my eyes fell upon was Ella's bunch of yellow ragwort; and what could be more natural than that I should go to sleep and dream of Runswick Bay?

It seems only yesterday that I was there, so clearly can I recall it, and yet it must be twenty years ago. I think I must write an account of my visit to Runswick Bay and give it to Ella, as it was her yellow flowers which took me back to the picturesque little place. If she cannot understand all I tell her now, she will learn to do so as she grows older.

I was a young man then, just beginning to make my way as an artist. It is slow work at first; until you have made a name, every one looks critically at your work; when once you have been pronounced a rising artist, every daub from your brush has a good market value. I had had much uphill work, but I loved my profession for its own sake, and I worked on patiently, and, at the time my story begins, several of my pictures had sold for fair prices, and I was not without hope that I might soon find a place in the Academy.

It was an unusually hot summer, and London was emptying fast. Every one who could afford it was going either to the moors or to the sea, and I felt very much inclined to follow their example. My father and mother had died when I was quite a child, and the maiden aunt who had brought me up had just passed away, and I had mourned her death very deeply, for she had been both father and mother to me. I felt that I needed change of scene, for I had been up for many nights with her during her last illness, and I had had my rest broken for so long, that I found it very difficult to sleep, and in many ways I was far from well....