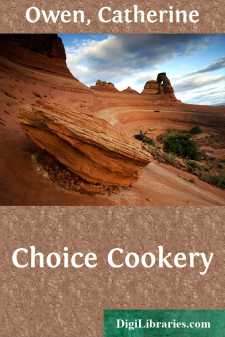 By choice cookery is meant exactly what the words imply. There will be no attempt to teach family or inexpensive cooking, those branches of domestic economy having been so excellently treated by capable hands already. It may be said en passant, however, that even choice cooking is not necessarily expensive. Many dishes cost little for the materials, but owe their daintiness and expensiveness to the care bestowed in cooking or to a fine sauce. For instance: cod, one of the cheapest of fish, and considered coarse food as usually served, becomes an epicurean dish when served with a fine Hollandaise or oyster sauce, and it will not even then be more expensive than any average-priced boiling fish. Flounder served as sole Normande conjures up memories of the famous Philippe, whose fortune it made, or it may be of luxurious little dinners at other famous restaurants, and is suggestive, in fact, of anything but economy. Yet it is really an inexpensive dish.

But while it is quite true that fine cooking does not always mean expensive cooking, it is also true that it requires the best materials and sufficient of them; that if satisfactory results are to be obtained there must be no attempt to stint or change proportions from a false idea of economy, although it must never be forgotten that all good cooking is economical, by which I mean that there is no waste, every cent’s worth of material being made to do its full duty.

In this book the object will be to give the newest and most recherché dishes, and these will naturally be expensive. Yet for those families who depend upon the caterer for everything in the way of fine soups, entrées, or sauces, because the cook can achieve only the plain part of the dinner, it will be found a great economy as well as convenience to be independent of this outside resource, which is always very costly, and invariably destroys the individuality of a repast. Many new recipes will be given, and others little known in private kitchens, or thought to be quite beyond the attainment of any but an accomplished chef. But if strict attention be paid to small matters, and the directions faithfully carried out, there will be no difficulty in a lady becoming her own chef.

I propose to begin with sauces. This is reversing the usual mode, and yet I think the reader will not regret the innovation. The cooking to be taught in these pages, being emphatically what is popularly known as “Delmonico cooking,” very much depends on the excellence of the sauces served with each dish; and as it is no time to learn to make a fine sauce when the dish it is served with is being cooked, I think the better plan is to give the sauces first. They will be frequently referred to, but no repetition of the recipes will be given.

Before proceeding further I will say a few words that may save time and patience hereafter. Of course it is not expected that any one will hope to succeed with elaborate dishes without understanding the principles of simple cooking, but many do this without perceiving that in that knowledge they hold the key to very much more, and I would ask readers who are in earnest about the matter to acquire the habit of putting two and two together in cooking as they would in fancy-work....