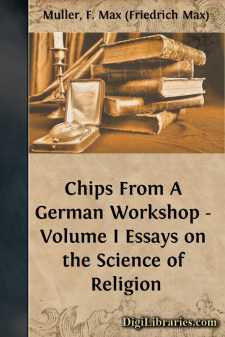 ore than twenty years have passed since my revered friend Bunsen called me one day into his library at Carlton House Terrace, and announced to me with beaming eyes that the publication of the Rig-veda was secure. He had spent many days in seeing the Directors of the East-India Company, and explaining to them the importance of this work, and the necessity of having it published in England. At last his efforts had been successful, the funds for printing my edition of the text and commentary of the Sacred Hymns of the Brahmans had been granted, and Bunsen was the first to announce to me the happy result of his literary diplomacy. 'Now,' he said, 'you have got a work for life—a large block that will take years to plane and polish.' 'But mind,' he added, 'let us have from time to time some chips from your workshop.'

I have tried to follow the advice of my departed friend, and I have published almost every year a few articles on such subjects as had engaged my attention, while prosecuting at the same time, as far as altered circumstances would allow, my edition of the Rig-veda, and of other Sanskrit works connected with it. These articles were chiefly published in the 'Edinburgh' and 'Quarterly Reviews,' in the 'Oxford Essays,' in 'Macmillan's' and 'Fraser's Magazines,' in the 'Saturday Review,' and in the 'Times.' In writing them my principal endeavour has been to bring out even in the most abstruse subjects the points of real interest that ought to engage the attention of the public at large, and never to leave a dark nook or corner without attempting to sweep away the cobwebs of false learning, and let in the light of real knowledge. Here, too, I owe much to Bunsen's advice, and when last year I saw in Cornwall the large heaps of copper ore piled up around the mines, like so many heaps of rubbish, while the poor people were asking for coppers to buy bread, I frequently thought of Bunsen's words, 'Your work is not finished when you have brought the ore from the mine: it must be sifted, smelted, refined, and coined before it can be of real use, and contribute towards the intellectual food of mankind.' I can hardly hope that in this my endeavour to be clear and plain, to follow the threads of every thought to the very ends, and to place the web of every argument clearly and fully before my readers, I have always been successful. Several of the subjects treated in these essays are, no doubt, obscure and difficult: but there is no subject, I believe, in the whole realm of human knowledge, that cannot be rendered clear and intelligible, if we ourselves have perfectly mastered it. And now while the two last volumes of my edition of the Rig-veda are passing through the press, I thought the time had come for gathering up a few armfulls of these chips and splinters, throwing away what seemed worthless, and putting the rest into some kind of shape, in order to clear my workshop for other work.

The first and second volumes which I am now publishing contain essays on the early thoughts of mankind, whether religious or mythological, and on early traditions and customs. There is to my mind no subject more absorbing than the tracing the origin and first growth of human thought;—not theoretically, or in accordance with the Hegelian laws of thought, or the Comtian epochs; but historically, and like an Indian trapper, spying for every footprint, every layer, every broken blade that might tell and testify of the former presence of man in his early wanderings and searchings after light and truth.

In the languages of mankind, in which everything new is old and everything old is new, an inexhaustible mine has been discovered for researches of this kind. Language still bears the impress of the earliest thoughts of man, obliterated, it may be, buried under new thoughts, yet here and there still recoverable in their sharp original outline. The growth of language is continuous, and by continuing our researches backward from the most modern to the most ancient strata, the very elements and roots of human speech have been reached, and with them the elements and roots of human thought....