China and the Manchus 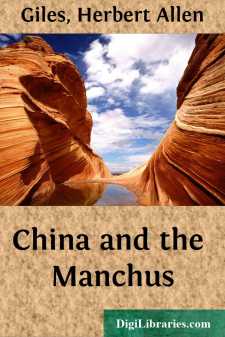 The Manchus are descended from a branch of certain wild Tungusic nomads, who were known in the ninth century as the Nü-chêns, a name which has been said to mean "west of the sea." The cradle of their race lay at the base of the Ever-White Mountains, due north of Korea, and was fertilised by the head waters of the Yalu River.

In an illustrated Chinese work of the fourteenth century, of which the Cambridge University Library possesses the only known copy, we read that they reached this spot, originally the home of the Su-shên tribe, as fugitives from Korea; further, that careless of death and prizing valour only, they carried naked knives about their persons, never parting from them by day or night, and that they were as "poisonous" as wolves or tigers. They also tattooed their faces, and at marriage their mouths. By the close of the ninth century the Nü-chêns had become subject to the neighbouring Kitans, then under the rule of the vigorous Kitan chieftain, Opaochi, who, in 907, proclaimed himself Emperor of an independent kingdom with the dynastic title of Liao, said to mean "iron," and who at once entered upon that long course of aggression against China and encroachment upon her territory which was to result in the practical division of the empire between the two powers, with the Yellow River as boundary, K`ai-fêng as the Chinese capital, and Peking, now for the first time raised to the status of a metropolis, as the Kitan capital. Hitherto, the Kitans had recognised China as their suzerain; they are first mentioned in Chinese history in A.D. 468, when they sent ambassadors to court, with tribute.

Turning now to China, the famous House of Sung, the early years of which were so full of promise of national prosperity, and which is deservedly associated with one of the two most brilliant periods in Chinese literature, was founded in 960. Korea was then forced, in order to protect herself from the encroachments of China, to accept the hated supremacy of the Kitans; but being promptly called upon to surrender large tracts of territory, she suddenly entered into an alliance with the Nü-chêns, who were also ready to revolt, and who sent an army to the assistance of their new friends. The Nü-chên and Korean armies, acting in concert, inflicted a severe defeat on the Kitans, and from this victory may be dated the beginning of the Nü-chên power. China had indeed already sent an embassy to the Nü-chêns, suggesting an alliance and also a combination with Korea, by which means the aggression of the Kitans might easily be checked; but during the eleventh century Korea became alienated from the Nü-chêns, and even went so far as to advise China to join with the Kitans in crushing the Nü-chêns. China, no doubt, would have been glad to get rid of both these troublesome neighbours, especially the Kitans, who were gradually filching territory from the empire, and driving the Chinese out of the southern portion of the province of Chihli.

For a long period China weakly allowed herself to be blackmailed by the Kitans, who, in return for a large money subsidy and valuable supplies of silk, forwarded a quite insignificant amount of local produce, which was called "tribute" by the Chinese court....