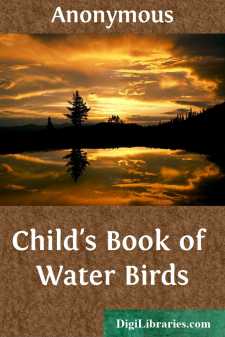 The Swan is a very beautiful bird. It is generally white, though a black swan has been discovered in Australia. It is not very often seen in this country. It was brought from Asia and Eastern Europe into England—from whence, most probably, a few specimens have been introduced into this country. The Swan is very graceful in the water, but on land it is an awkward waddler.

The Coot is generally found in large sheets of water, particularly if shaded by trees. The nest is a mass of flags, reeds, and grass, usually at the water’s edge, but sometimes actually in the water. The Coot’s eggs are generally seven in number. They are of a greenish-white, spotted.

The Dabchick is a very timid bird, and when alarmed instantly dives, after which it is useless to look after the bird. It is easily domesticated, and is often seen placed as an ornament to ponds, where it swims about very merrily, and seems to enjoy a game of hide and seek with any one who is attempting to watch its movements.

The Teal is the smallest of the ducks. The Green-winged Teal is the American. It feeds on fresh-water insects, seeds, and aquatic plants. When fat it is considered a great luxury. It is almost always seen on well furnished tables. It generally feeds at night. It flies very swiftly, and utters a whistling cry.

The Goose is a very common bird. In Lincolnshire, England, enormous flocks are bred, containing from two to ten thousand each. They are subjected to the plucking of their wing-feathers periodically, in order to supply the demand for quills.

The Oyster Catcher feeds generally on shell-fish, oysters, limpets, &c. He detaches them from the rocks to which they are fastened, and opens them with his long, stout bill. The head, neck, and body are black. It lays two olive-brown eggs, spotted with black.

Leavitt & Allen Booksellers, Publishers, and Stationers, at the New and elegant Store, 27 Dey Street, a few doors West of Broadway. Where in a central and convenient location, and with much more commodious Warerooms, they are enabled to serve all their customers and friends faithfully. They assure Country Merchants generally that their assortment of School Books, Library and Miscellaneous Books, Blank Books, Paper, &c., is of the most desireable character....
Show more
Show less