Children of the Old Testament 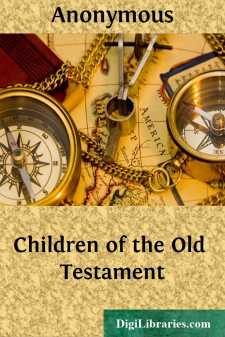 Two boys, Joseph and Benjamin, sons of a rich Eastern shepherd, lived in their father's wide tent in the great valley of Hebron. Joseph was about seventeen years of age, and tall and strong, so that he could drive sheep, herd cattle, and work in the harvest field. Benjamin was a little red-cheeked boy of five, with merry brown eyes, and his brother Joseph loved him very dearly, for their mother was dead. The father of the boys, whose name was Jacob, had thousands of sheep and hundreds of camels, asses, and cattle, so that he was looked upon as a very rich man; and he had ten grown-up sons, who roamed about the country feeding the sheep in the green valleys and by the water-brooks.

Joseph was dearly loved by Jacob, because the boy had been born when his father was an old man; and that was one reason why his older brothers hated Joseph and did all they could to annoy him. Perhaps they feared that their father would leave all his wealth to his favourite son, and you know that this sometimes makes quarrels among brothers and sisters.

Now Jacob showed his special love for Joseph by making him a coat of many colours—a long tunic with stripes of red, green, blue, and yellow, having a coloured fringe at the knee, and a bright shawl to bind it closely round his waist. Joseph was very proud of this coat, but the others hated both it and him, believing that he would get the best of everything from their father—all but Reuben, the eldest, who loved the lad, and smiled kindly when he saw his gay tunic.

One day at the harvest-time the sons of Jacob were all at home, cutting down the yellow grain, and taking it away on the backs of asses to the threshing-place. Joseph, of course, worked with them, but they were always finding fault with him, and trying to vex him. He knew, however, that his father loved him, and this made him able to bear their unkindness with patience. Besides, his mind was filled with boyish thoughts of how great he would be, and what he would do, when he grew up to be a man. He was very strong for his years, and joined with the women in tying the grain into bundles, and loading it on the asses; and it was very hard work, indeed, out there in the scorching Eastern sun.

But rest came at night. When Joseph lay down with his little brother on a heap of straw at the back of the tent, he slept soundly, and dreamt the golden dreams of youth.

He dreamt one night that they were all binding sheaves once more out in the sunny field, and his brothers' sheaves rose up and bowed down to his sheaf. Joseph took it all in earnest, and next day he told the dream to his brothers, perhaps as they were sitting at their midday meal in the shade of a spreading tree; but he soon knew from their angry faces that they saw nothing pleasant in it, and when his story was told they called out to him,—

"Shalt thou, indeed, reign over us?"

They were jealous of him, and, of course, this did not make them any kinder to the young lad. But Joseph remembered what his father had told him—that dreams were sometimes messages from God; and he believed that his dream was a message, and that he would one day be greater than all his brothers....