Children of the Ghetto A Study of a Peculiar People 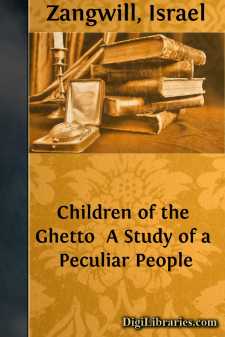 Not here in our London Ghetto the gates and gaberdines of the olden Ghetto of the Eternal City; yet no lack of signs external by which one may know it, and those who dwell therein. Its narrow streets have no specialty of architecture; its dirt is not picturesque. It is no longer the stage for the high-buskined tragedy of massacre and martyrdom; only for the obscurer, deeper tragedy that evolves from the pressure of its own inward forces, and the long-drawn-out tragi-comedy of sordid and shifty poverty. Natheless, this London Ghetto of ours is a region where, amid uncleanness and squalor, the rose of romance blows yet a little longer in the raw air of English reality; a world which hides beneath its stony and unlovely surface an inner world of dreams, fantastic and poetic as the mirage of the Orient where they were woven, of superstitions grotesque as the cathedral gargoyles of the Dark Ages in which they had birth. And over all lie tenderly some streaks of celestial light shining from the face of the great Lawgiver.

The folk who compose our pictures are children of the Ghetto; their faults are bred of its hovering miasma of persecution, their virtues straitened and intensified by the narrowness of its horizon. And they who have won their way beyond its boundaries must still play their parts in tragedies and comedies—tragedies of spiritual struggle, comedies of material ambition—which are the aftermath of its centuries of dominance, the sequel of that long cruel night in Jewry which coincides with the Christian Era. If they are not the Children, they are at least the Grandchildren of the Ghetto.

The particular Ghetto that is the dark background upon which our pictures will be cast, is of voluntary formation.

People who have been living in a Ghetto for a couple of centuries, are not able to step outside merely because the gates are thrown down, nor to efface the brands on their souls by putting off the yellow badges. The isolation imposed from without will have come to seem the law of their being. But a minority will pass, by units, into the larger, freer, stranger life amid the execrations of an ever-dwindling majority. For better or for worse, or for both, the Ghetto will be gradually abandoned, till at last it becomes only a swarming place for the poor and the ignorant, huddling together for social warmth. Such people are their own Ghetto gates; when they migrate they carry them across the sea to lands where they are not. Into the heart of East London there poured from Russia, from Poland, from Germany, from Holland, streams of Jewish exiles, refugees, settlers, few as well-to-do as the Jew of the proverb, but all rich in their cheerfulness, their industry, and their cleverness. The majority bore with them nothing but their phylacteries and praying shawls, and a good-natured contempt for Christians and Christianity. For the Jew has rarely been embittered by persecution. He knows that he is in Goluth, in exile, and that the days of the Messiah are not yet, and he looks upon the persecutor merely as the stupid instrument of an all-wise Providence....