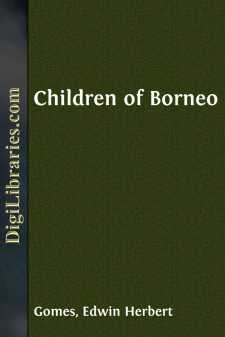 Away down in the Indian Ocean there is a long chain of islands that stretches from Burmah to Australia. One of these is New Guinea which is the largest island in the world (leaving out Australia), and Borneo comes next in size. It is nearly four times as large as England. One quarter of it—the States of Sarawak and British North Borneo—is under British influence. The rest is all claimed by the Dutch, excepting one small State, Brunei, between North Borneo and Sarawak, which is governed by a Malay Sultan, who is a Mahommedan. Sarawak is governed by an English Rajah, or King, Sir Charles Brooke, who succeeded his uncle, Sir James Brooke, in 1868;—British North Borneo is owned by an English Trading Company, called the North Borneo Company, who appoint an Englishman as Governor to rule it for them.

If you look at a map of Borneo you will see that the Equator divides the island into two parts, so that Borneo is right in the middle of the Torrid Zone. The climate is therefore tropical, that is to say there is no spring, autumn or winter, but only summer, and it is always much hotter in Borneo than it is in the hottest summer in England. So, if an English boy went to live in Borneo, he would find his English clothes too thick and warm for him to wear there, and he would have to have thin cotton garments.

Most of the country of Borneo is covered with thick jungle, where large forest trees grow close to each other, many of them with trunks over six feet in diameter. These trees are often loaded with creepers and ferns, and from the branches, high up overhead, beautiful orchids hang.

The natives of Borneo are called Dyaks, and these tropical jungles are their home. Let me try and describe to you what these people are like. They are not black like negroes, but have a brown skin. They are not as tall as Englishmen, but are slightly bigger than the Malays. The Dyak men and women wear very little clothing because of the great heat. The Dyak men wear a waistcloth which is made either of the soft inner bark of a tree, or else of cotton cloth. It is about one yard wide, and from eight to eighteen feet in length, and is twisted round and round their waists and pulled up tight between the thighs, one end hanging down in front and the other behind. Dyak women wear a short petticoat which is drawn tightly round the waist and reaches down to the knees. Round their bodies the women wear hoops of rattan, a kind of cane, and these are threaded through small brass rings placed so close together as to hide the rattan. Both men and women wear necklaces, bracelets, and ear-rings. The men wear their hair long, and they blacken their teeth and often file them to a point, or bore holes in them and insert brass studs into them.

Let me tell you something of the kind of life the Dyaks used to live in the old days. You have heard of the head-hunters of Borneo. Seventy years ago the Dyaks were one of the most savage and cruel people in the world. In those days there was constant warfare between the different tribes....