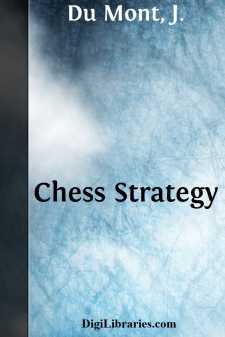 I. RULES OF THE GAME

A GAME of chess is played by two opponents on a square board consisting of sixty-four White and Black squares arranged alternately. The forces on each side comprise sixteen units, namely a King, a Queen, two Rooks, two Bishops, two Knights, and eight Pawns. All units move according to different laws, and the difference in their mobility is the criterion of their relative value and of the fighting power they contribute towards achieving the ultimate aim, namely, the capture of the opposing King. Before I can explain what is meant by the capture of the King, I must set out the rules of the game in full.

Diagram 1 shows the position the forces take up for the contest. The board is so placed that there is a white square at the top left-hand corner. The Rooks take up their positions at the corner squares, and next to them the Knights. Next to those again are the Bishops, and in the centre the King and Queen, the White Queen on a White square, and the Black Queen on a Black square. The eight pawns occupy the ranks immediately in front of the pieces. From this initial position, White begins the game in which the players must move alternately.

The pieces move in the following way: The Rook can move from any square it happens to be on, to any other square which it can reach in a straight line, either perpendicularly or horizontally, unless there is another piece of the same colour in the way, in which case it can only move as far as the square immediately in front of that piece. If it is an opposing piece which blocks the way, he can move on to the square that piece occupies, thereby capturing it. The piece thus captured is removed from the board. The Bishop can operate along either of the diagonals of which the square on which he is standing forms part. A Bishop on a White square can there fore never get on to a Black one.

The Queen commands both the straight and the oblique lines which start from the square she stands on, and therefore unites the power of both Rook and Bishop in her movements....