Chess and Checkers : the Way to Mastership 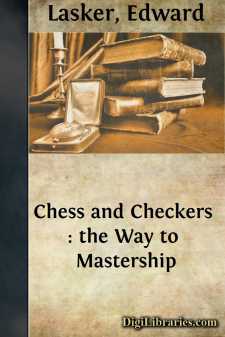 The present world war has given great impetus to the game of Chess. In the prison camps, in the field hospitals, in the training camps and even in the trenches Chess has become a favorite occupation in hours of leisure, not only because it offers a most fascinating pastime, but mainly because it serves beyond any doubt to develop what is now the most interesting study for every soldier—the grasp of the principles underlying military strategy and the ability to conceive and to carry out military operations on a large scale.

Frederick the Great, Napoleon and Moltke, the great scientists of war, had a decided liking for the game of Chess and owed to it many an inspiration which helped them in laying out their military plans. Indeed, no other game exists which offers such complete analogies to war.

Two armies oppose each other on the Chess board, composed of different units which may well be compared with infantry, cavalry and artillery.

The success of the operations on the board, which represents the battlefield, does not depend upon any element of chance, but solely upon the ingenuity and the skill of the players who are the commanders-in-chief of the forces.

Although a Chess game differs from a battle in that the material strength of the opponents is equal, the order of events is the same in Chess as in war. The troops are first mobilized and made ready for action with utmost speed, then important positions are occupied which give the troops freedom of action and insure safe lines of retreat and, finally, when the formation of the enemy is known, the strategic plan is made which the generals try to carry out by means of different tactical maneuvers.

Considering this similarity of Chess and war it is not surprising that Chess has gained greatly in popularity among all those whose work or thought is more than superficially influenced by the present war.

No special inducement, however, would be necessary to learn the game, were it more generally known that great advantage is to be derived from the study of Chess, quite apart from the cultivation of strategic ability.

The faculty which is developed by playing Chess is useful wherever logical thinking and concentration are needed, and it cannot be denied that these qualities are most desirable in the every day struggle in which mental work has so largely superseded manual labor.

The thoughtful playing of the game not only cultivates the logical quality and imaginative power of the mind but also tends to develop strength of character. It teaches us not to be hasty in our decisions, but to exercise foresight at all times as we must abide by all consequences of our actions. Moreover, we learn from it circumspection which causes us to survey the whole scene of action and does not allow us to lose ourselves in detail; we also learn not to be discouraged by reverses in our affairs but to hold out and always search for fresh resources.

Thus, Chess serves a good purpose for young and old. The boy will find it a fascinating pastime and, unconsciously sharpening his wits in playing the game, will acquire a fine preparation for his calling in life, no matter what it may be....