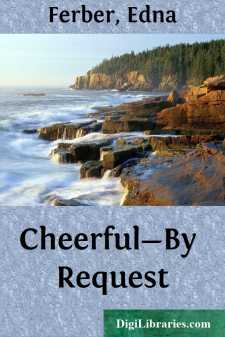 The editor paid for the lunch (as editors do). He lighted his seventh cigarette and leaned back. The conversation, which had zigzagged from the war to Zuloaga, and from Rasputin the Monk to the number of miles a Darrow would go on a gallon, narrowed down to the thin, straight line of business.

"Now don't misunderstand. Please! We're not presuming to dictate. Dear me, no! We have always felt that the writer should be free to express that which is in his—ah—heart. But in the last year we've been swamped with these drab, realistic stories. Strong, relentless things, you know, about dishwashers, with a lot of fine detail about the fuzz of grease on the rim of the pan. And then those drear and hopeless ones about fallen sisters who end it all in the East River. The East River must be choked up with 'em. Now, I know that life is real, life is earnest, and I'm not demanding a happy ending, exactly. But if you could—that is—would you—do you see your way at all clear to giving us a fairly cheerful story? Not necessarily Glad, but not so darned Russian, if you get me. Not pink, but not all grey either. Say—mauve." ...

That was Josie Fifer's existence. Mostly grey, with a dash of pink. Which makes mauve.

Unless you are connected (which you probably are not) with the great firm of Hahn & Lohman, theatrical producers, you never will have heard of Josie Fifer.

There are things about the theatre that the public does not know. A statement, at first blush, to be disputed. The press agent, the special writer, the critic, the magazines, the Sunday supplement, the divorce courts—what have they left untold? We know the make of car Miss Billboard drives; who her husbands are and were; how much the movies have offered her; what she wears, reads, says, thinks, and eats for breakfast. Snapshots of author writing play at place on Hudson; pictures of the play in rehearsal; of the director directing it; of the stage hands rewriting it—long before the opening night we know more about the piece than does the playwright himself, and are ten times less eager to see it.

Josie Fifer's knowledge surpassed even this. For she was keeper of the ghosts of the firm of Hahn & Lohman. Not only was she present at the birth of a play; she officiated at its funeral. She carried the keys to the closets that housed the skeletons of the firm. When a play died of inanition, old age, or—as was sometimes the case—before it was born, it was Josie Fifer who laid out its remains and followed it to the grave.

Her notification of its demise would come thus:

"A little waspish this morning, aren't you, Josephine?"

"I've got twenty-five bathing suits for the No. 2 'Ataboy' company to mend and clean and press before five this afternoon. If you think I'm going to stand here wasting my—"

"All right, all right! I just wanted to tell you that 'My Mistake' closes Saturday. The stuff'll be up Monday morning early."

A sardonic laugh from Josie....