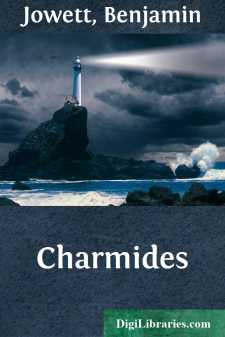 The subject of the Charmides is Temperance or (Greek), a peculiarly Greek notion, which may also be rendered Moderation (Compare Cic. Tusc. '(Greek), quam soleo equidem tum temperantiam, tum moderationem appellare, nonnunquam etiam modestiam.'), Modesty, Discretion, Wisdom, without completely exhausting by all these terms the various associations of the word. It may be described as 'mens sana in corpore sano,' the harmony or due proportion of the higher and lower elements of human nature which 'makes a man his own master,' according to the definition of the Republic. In the accompanying translation the word has been rendered in different places either Temperance or Wisdom, as the connection seemed to require: for in the philosophy of Plato (Greek) still retains an intellectual element (as Socrates is also said to have identified (Greek) with (Greek): Xen. Mem.) and is not yet relegated to the sphere of moral virtue, as in the Nicomachean Ethics of Aristotle.

The beautiful youth, Charmides, who is also the most temperate of human beings, is asked by Socrates, 'What is Temperance?' He answers characteristically, (1) 'Quietness.' 'But Temperance is a fine and noble thing; and quietness in many or most cases is not so fine a thing as quickness.' He tries again and says (2) that temperance is modesty. But this again is set aside by a sophistical application of Homer: for temperance is good as well as noble, and Homer has declared that 'modesty is not good for a needy man.' (3) Once more Charmides makes the attempt. This time he gives a definition which he has heard, and of which Socrates conjectures that Critias must be the author: 'Temperance is doing one's own business.' But the artisan who makes another man's shoes may be temperate, and yet he is not doing his own business; and temperance defined thus would be opposed to the division of labour which exists in every temperate or well-ordered state. How is this riddle to be explained?

Critias, who takes the place of Charmides, distinguishes in his answer between 'making' and 'doing,' and with the help of a misapplied quotation from Hesiod assigns to the words 'doing' and 'work' an exclusively good sense: Temperance is doing one's own business;—(4) is doing good.

Still an element of knowledge is wanting which Critias is readily induced to admit at the suggestion of Socrates; and, in the spirit of Socrates and of Greek life generally, proposes as a fifth definition, (5) Temperance is self-knowledge. But all sciences have a subject: number is the subject of arithmetic, health of medicine—what is the subject of temperance or wisdom? The answer is that (6) Temperance is the knowledge of what a man knows and of what he does not know. But this is contrary to analogy; there is no vision of vision, but only of visible things; no love of loves, but only of beautiful things; how then can there be a knowledge of knowledge? That which is older, heavier, lighter, is older, heavier, and lighter than something else, not than itself, and this seems to be true of all relative notions—the object of relation is outside of them; at any rate they can only have relation to themselves in the form of that object....