Charlie to the Rescue 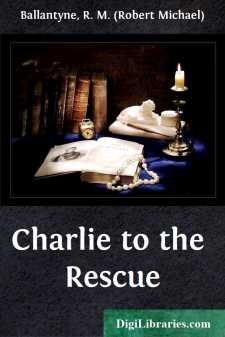 To be generally helpful was one of the chief points in the character of Charlie Brooke.

He was evidently born to aid mankind. He began by helping himself to everything in life that seemed at all desirable. This was natural, not selfish.

At first there were few things, apparently, that did seem to his infant mind desirable, for his earliest days were marked by a sort of chronic crossness that seemed quite unaccountable in one so healthy; but this was eventually traced to the influence of pins injudiciously disposed about the person by nurse. Possibly this experience may have tended to develop a spirit of brave endurance, and might perhaps account for the beautiful modifications of character that were subsequently observed in him. At all events, sweet, patient amiability was a prevailing feature in the boy long before the years of infancy were over, and this heavenly aspect of him was pleasantly diversified, in course of time, by occasional displays of resolute—we might almost say heroic—self-will, which proved a constant source of mingled pride and alarm to his widowed mother.

From a very early period of life little Charlie manifested an intense desire, purpose, and capacity for what may be called his life-work of rescuing human beings from trouble and danger. It became a passion with him as years rolled on, and was among the chief means that brought about the changes in his chequered career.

It happened thus. One day, when he had reached the immature age of five, he was left in the nursery for a few moments in company with a wash-tub, in which his mother had been cleansing the household linen.

Charlie’s earnest desire to please and obey his mother constantly came into collision with that self-will to which we have referred. Separately, these qualities may perhaps work quietly, at least as regards their possessor, but unitedly they form a mixture which is apt to become explosive in early youth.

“Don’t touch the tub, Charlie; I’ll be back directly,” said Mrs Brooke, as she was leaving the nursery. “Don’t even go near it.”

He spoke with much decision, for he adored water—not to drink but to play with—and seemed to realise the danger of his position, and the necessity for self-control.

The temptation to avail himself of the chance, however, was almost too much for him. Feeling that an internal conflict was pending, he toddled to the fire, turned his back to it à la paterfamilias, and glared at the tub, resolved, come what might, to be “dood.” But fate was against him!

Suddenly he became aware that something more than radiated heat was operating in rear. He glanced behind. His cotton tunic was in flames! In the twinkling of an eye he was seated in the wash-tub, his hands clasped in horror as he thought of his guilt, and the flames thoroughly extinguished...!