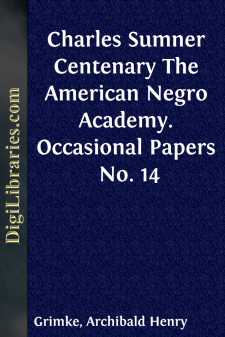 Every time a great man comes on the stage of human affairs, the fable of the Hercules repeats itself. He gets a sword from Mercury, a bow from Apollo, a breastplate from Vulcan, a robe from Minerva. Many streams from many sources bring to him their united strength. How else could the great man be equal to his time and task? What was true of the Greek Demigod was likewise true of Charles Sumner. His study of the law for instance formed but a part of his great preparation. The science of the law, not its practice, excited his enthusiasm. He turned instinctively from the technicalities, the tergiversations, the gladiatorial display and contention of the legal profession. To him they were but the ephemera of the long summertide of jurisprudence. He thirsted for the permanent, the ever living springs and principles of the law. Grotius and Pothier and Mansfield and Blackstone and Marshall and Story were the shining heights to which he aspired. He had neither the tastes nor the talents to emulate the Erskines and the Choates of the Bar.

His vast readings in the field of history and literature contributed in like manner toward his splendid outfit. So too his wide contact and association with the leading spirits of the times in Europe and America. All combined to teach him to know himself and the universal verities of man and society, to distinguish the invisible and enduring substance of life from its merely accidental and transient phases and phenomena.

He was an apt pupil and laid up in his heart the great lessons of the Book of Truth. His visit to Europe served to complete his apprenticeship. It was like Hercules going into the Nemean forest to cut himself a club. The same grand object lesson he saw everywhere—man, human society, human thoughts, human strivings, human wrong, human misery. Beneath differences of language, governments, religion, race, color, he discerned the underlying human principle and passion, which make all races kin, all men brothers. In strange and distant lands he found the human heart with its friendships, heroisms, beatitudes, the human intellect with its never ending movement and progress. He found home, a common destiny wherever he found common ideas and aspirations. And these he had but to look around to behold. He felt himself a citizen of an immense over-nation, of a vast world of federated hopes and interests.

When the plan for this visit had taken shape in his own mind, he consulted his friends, Judge Story, Prof. Greenleaf, and President Quincy, who were not at all well affected to it. The first two thought it would wean him from his profession, the last one that Europe would spoil him, “send him back with a mustache and a walking-stick.” Ah! how little did they comprehend him, how hard to understand that this young and indefatigable scholar was only going abroad to cut himself a club for the Herculean labors of his ripe manhood. He went, saw, and conquered. He saw the promised land of international fellowship and peace, and conquered in his own breast the evil genius of war....