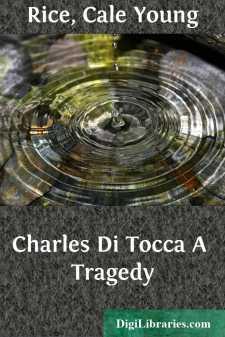 Scene.—The Island Leucadia. A ruined temple of Apollo near the town of Pharo. Broken columns and stones are strewn, or stand desolately about. It is night—the moon rising. Antonio, who has been waiting impatiently, seats himself on a stone. By a road near the ruins Fulvia enters, cloaked.

Antonio (turning): Helen——! Fulvia: A comely name, my lord. Antonio: Ah, you?My father's unforgetting Fulvia? Fulvia: At least not Helena, whoe'er she be. Antonio: And did I call you so? Fulvia: Unless it isThese stones have tongue and passion. Antonio: Then the nightRecalling dreams of dim antiquity'sHeroic bloom worked on me.—But whence areYour steps, so late, alone? Fulvia: From the Cardinal,Who has but come. Antonio: What comfort there? Fulvia: With doomThe moody bolt of Rome broods over us. Antonio: My father will not bind his heresy? Fulvia: You with him walked to-day. What said he? Antonio: I?With him to-day? Ah, true. What may be done? Fulvia: He has been strange of late and silent, laughs,Seeing the Cross, but softly and almostAs it were some sweet thing he loved. Antonio (absently): As if'Twere some sweet thing—he laughs—is strange—you say? Fulvia: Stranger than is Antonio his son,Who but for some expectancy is vacant.(She makes to go.) Antonio: Stay, Fulvia, though I am not in poise.Last night I dreamed of you: in vain you hoveredTo reach me from the coil of swift Charybdis.

Fulvia: A woman's voice!(Looking down the road.)And hasting here! Antonio: Alone? Fulvia: No, with another! Antonio: Go, then, Fulvia.'Tis one would speak with me. Fulvia: Ah? (She goes.)

Helena: Antonio! Antonio: My Helena, what is it? You are wanAnd tremble as a blossom quick with fearOf shattering. What is it? Speak. Helena: Not true!O, 'tis not true! Antonio: What have you chanced upon? Helena: Say no to me, say no, and no again! Antonio: Say no, and no? Helena: Yes; I am reeling, wrung,With one glance o'er the precipice of ill!Say his incanted prophecies spring fromNo power that's more than frenzied fantasy! Antonio: Who prophesies? Who now upon this isleMore than visible and present dayCan gather to his eye? Tell me. Helena: The monk—Ah, chide me not!—mad Agabus, who canUnsphere dark spirits from their evil airsAnd show all things of love or death, seized meAs hither I stole to thee. With wild looksAnd wilder lips he vented on my earBoding more wild than both. "Sappho!" he cried,"Sappho! Sappho!" and probed my eyes as ifDestiny moved dark-visaged in their deeps.Then tore his rags and moaned, "So young, to cease!"Gazed then out into awful vacancy;And whispered hotly, following his gaze,"The Shadow! Shadow!" Antonio: This is but a whim,A sudden gloomy surge of superstition.Put it from you, my Helena. Helena: But heHas often cleft the future with his ken,Seen through it to some lurking miseryAnd mar of love: or the dim knell of deathHeard and revealed....
Show more
Show less