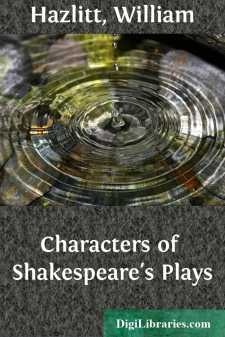 The book here included among The World's Classics made its first appearance as an octavo volume of xxiv + 352 pages, with the title- page:

William Hazlitt (1778-1830) came of an Irish Protestant stock, and of a branch of it transplanted in the reign of George I from the county of Antrim to Tipperary. His father migrated, at nineteen, to the University of Glasgow (where he was contemporary with Adam Smith), graduated in 1761 or thereabouts, embraced the principles of the Unitarians, joined their ministry, and crossed over to England; being successively pastor at Wisbech in Cambridgeshire, at Marshfield in Gloucestershire, and at Maidstone. At Wisbech he married Grace Loftus, the daughter of a neighbouring farmer. Of the many children granted to them but three survived infancy. William, the youngest of these, was born in Mitre Lane, Maidstone, on April 10, 1778. From Maidstone the family moved in 1780 to Bandon, Co. Cork; and from Bandon in 1783 to America, where Mr. Hazlitt preached before the new Assembly of the States-General of New Jersey, lectured at Philadelphia on the Evidences of Christianity, founded the First Unitarian Church at Boston, and declined a proffered diploma of D.D. In 1786-7 he returned to England and took up his abode at Wem, in Shropshire. His elder son, John, was now old enough to choose a vocation, and chose that of a miniature-painter. The second child, Peggy, had begun to paint also, amateurishly in oils. William, aged eight—a child out of whose recollection all memories of Bandon and of America (save the taste of barberries) soon faded— took his education at home and at a local school. His father designed him for the Unitarian ministry.

The above dry recital contains a number of facts not to be overlooked as predisposing causes in young Hazlitt's later career; as that he was Irish by blood, intellectual by geniture, born into dissent, and a minority of dissent, taught at home to value the things of the mind, in early childhood a nomad, in later childhood 'privately educated'—a process which (whatever its merits) is apt to develop the freak as against the citizen, the eccentric and lop- sided as against what is proportionate and disciplined. Young Hazlitt's cleverness and his passion for individual liberty were alike precocious. In 1791, at the age of thirteen, he composed and published in The Shrewsbury Chronicle a letter of protest against the calumniators of Dr. Priestley: a performance which, for the gravity of its thought as for the balance of its expression, would do credit to ninety-nine grown men in a hundred. At fifteen, his father designing that he should enter the ministry, he proceeded to the Unitarian College, Hackney; where his master, a Mr. Corrie, found him 'rather backward in many of the ordinary points of learning and, in general, of a dry, intractable understanding', the truth being that the lad had set his heart against the ministry, aspiring rather to be a philosopher—in particular a political philosopher. At fourteen he had conceived ('in consequence of a dispute one day, after coming out of Meeting, between my father and an old lady of the congregation, respecting the repeal of the Corporation and Test Acts and the limits of religious toleration') the germ of his Project for a New Theory of Civil and Criminal Legislation, published in his maturer years (1828), but drafted and scribbled upon constantly in these days, to the neglect of his theological studies....