Characters and events of Roman History 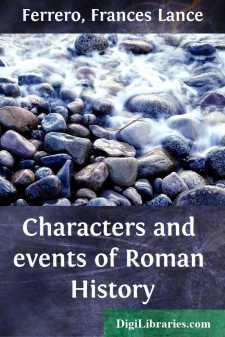 "Corruption" in Ancient Rome And Its Counterpart in Modern History

Two years ago in Paris, while giving a course of lectures on Augustus at the Collège de France, I happened to say to an illustrious historian, a member of the French Academy, who was complimenting me: "But I have not remade Roman history, as many admirers think. On the contrary, it might be said, in a certain sense, that I have only returned to the old way. I have retaken the point of view of Livy; like Livy, gathering the events of the story of Rome around that phenomenon which the ancients called the 'corruption' of customs—a novelty twenty centuries old!"

Spoken with a smile and in jest, these words nevertheless were more serious than the tone in which they were uttered. All those who know Latin history and literature, even superficially, remember with what insistence and with how many diverse modulations of tone are reiterated the laments on the corruption of customs, on the luxury, the ambition, the avarice, that invaded Rome after the Second Punic War. Sallust, Cicero, Livy, Horace, Virgil, are full of affliction because Rome is destined to dissipate itself in an incurable corruption; whence we see, then in Rome, as to-day in France, wealth, power, culture, glory, draw in their train—grim but inseparable comrade!—a pessimism that times poorer, cruder, more troubled, had not known. In the very moment in which the empire was ordering itself, civil wars ended; in that solemn Pax Romana which was to have endured so many ages, in the very moment in which the heart should have opened itself to hope and to joy, Horace describes, in three fine, terrible verses, four successive generations, each corrupting Rome, which grew ever the worse, ever the more perverse and evil-disposed:

"Our fathers were worse than our grandsires; we have deteriorated from our fathers; our sons will cause us to be lamented." This is the dark philosophy that a sovereign spirit like Horace derived from the incredible triumph of Rome in the world. At his side, Livy, the great writer who was to teach all future generations the story of the city, puts the same hopeless philosophy at the base of his wonderful work:

Rome was originally, when it was poor and small, a unique example of austere virtue; then it corrupted, it spoiled, it rotted itself by all the vices; so, little by little, we have been brought into the present condition in which we are able neither to tolerate the evils from which we suffer, nor the remedies we need to cure them.

The same dark thought, expressed in a thousand forms, is found in almost every one of the Latin writers.

This theory has misled and impeded my predecessors in different ways: some, considering that the writers bewail the unavoidable dissolution of Roman society at the very time when Rome was most powerful, most cultured, richest, have judged conventional, rhetorical, literary, these invectives against corruption, these praises of ancient simplicity, and therefore have held them of no value in the history of Rome....