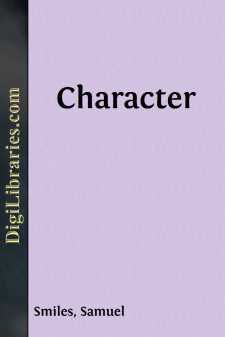 CHAPTER I.—INFLUENCE OF CHARACTER. "Unless above himself he can Erect himself, how poor a thingis man"—DANIEL."Character is moral order seen through the medium, of anindividual nature.... Men of character are the conscience ofthe society to which they belong."—EMERSON."The prosperity of a country depends, not on the abundanceof its revenues, nor on the strength of its fortifications,nor on the beauty of its public buildings; but it consistsin the number of its cultivated citizens, in its men ofeducation, enlightenment, and character; here are to befound its true interest, its chief strength, its realpower."—MARTIN LUTHER.

Character is one of the greatest motive powers in the world. In its noblest embodiments, it exemplifies human nature in its highest forms, for it exhibits man at his best.

Men of genuine excellence, in every station of life—men of industry, of integrity, of high principle, of sterling honesty of purpose—command the spontaneous homage of mankind. It is natural to believe in such men, to have confidence in them, and to imitate them. All that is good in the world is upheld by them, and without their presence in it the world would not be worth living in.

Although genius always commands admiration, character most secures respect. The former is more the product of brain-power, the latter of heart-power; and in the long run it is the heart that rules in life. Men of genius stand to society in the relation of its intellect, as men of character of its conscience; and while the former are admired, the latter are followed.

Great men are always exceptional men; and greatness itself is but comparative. Indeed, the range of most men in life is so limited, that very few have the opportunity of being great. But each man can act his part honestly and honourably, and to the best of his ability. He can use his gifts, and not abuse them. He can strive to make the best of life. He can be true, just, honest, and faithful, even in small things. In a word, he can do his Duty in that sphere in which Providence has placed him.

Commonplace though it may appear, this doing of one's Duty embodies the highest ideal of life and character. There may be nothing heroic about it; but the common lot of men is not heroic. And though the abiding sense of Duty upholds man in his highest attitudes, it also equally sustains him in the transaction of the ordinary affairs of everyday existence. Man's life is "centred in the sphere of common duties." The most influential of all the virtues are those which are the most in request for daily use. They wear the best, and last the longest. Superfine virtues, which are above the standard of common men, may only be sources of temptation and danger. Burke has truly said that "the human system which rests for its basis on the heroic virtues is sure to have a superstructure of weakness or of profligacy."

When Dr. Abbot, afterwards Archbishop of Canterbury, drew the character of his deceased friend Thomas Sackville, he did not dwell upon his merits as a statesman, or his genius as a poet, but upon his virtues as a man in relation to the ordinary duties of life....