Chaldea From the Earliest Times to the Rise of Assyria

by Zenaide A. (Zenaide Alexeievna) Ragozin 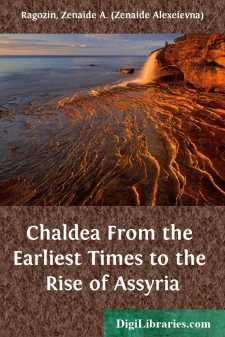 1. In or about the year before Christ 606, Nineveh, the great city, was destroyed. For many hundred years had she stood in arrogant splendor, her palaces towering above the Tigris and mirrored in its swift waters; army after army had gone forth from her gates and returned laden with the spoils of conquered countries; her monarchs had ridden to the high place of sacrifice in chariots drawn by captive kings. But her time came at last. The nations assembled and encompassed her around. Popular tradition tells how over two years lasted the siege; how the very river rose and battered her walls; till one day a vast flame rose up to heaven; how the last of a mighty line of kings, too proud to surrender, thus saved himself, his treasures and his capital from the shame of bondage. Never was city to rise again where Nineveh had been.

2. Two hundred years went by. Great changes had passed over the land. The Persian kings now held the rule of Asia. But their greatness also was leaning towards its decline and family discords undermined their power. A young prince had rebelled against his elder brother and resolved to tear the crown from him by main force. To accomplish this, he had raised an army and called in the help of Grecian hirelings. They came, 13,000 in number, led by brave and renowned generals, and did their duty by him; but their valor could not save him from defeat and death. Their own leader fell into an ambush, and they commenced their retreat under the most disastrous circumstances and with little hope of escape.

3. Yet they accomplished it. Surrounded by open enemies and false friends, tracked and pursued, through sandy wastes and pathless mountains, now parched with heat, now numbed with cold, they at last reached the sunny and friendly Hellespont. It was a long and weary march from Babylon on the Euphrates, near which city the great battle had been fought. They might not have succeeded had they not chosen a great and brave commander, Xenophon, a noble Athenian, whose fame as scholar and writer equals his renown as soldier and general. Few books are more interesting than the lively relation he has left of his and his companions' toils and sufferings in this expedition, known in history as "The Retreat of the Ten Thousand"—for to that number had the original 13,000 been reduced by battles, privations and disease. So cultivated a man could not fail, even in the midst of danger and weighed down by care, to observe whatever was noteworthy in the strange lands which he traversed. So he tells us how one day his little army, after a forced march in the early morning hours and an engagement with some light troops of pursuers, having repelled the attack and thereby secured a short interval of safety, travelled on till they came to the banks of the Tigris. On that spot, he goes on, there was a vast desert city. Its wall was twenty-five feet wide, one hundred feet high and nearly seven miles in circuit. It was built of brick with a basement, twenty feet high, of stone....