Cetywayo and his White Neighbours Remarks on Recent Events in Zululand, Natal, and the Transvaal 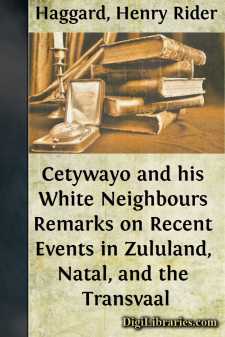 The writer on Colonial Affairs is naturally, to some extent, discouraged by the knowledge that the subject is an unattractive one to a large proportion of the reading public. It is difficult to get up anything beyond a transient interest in the affairs of our Colonial dependencies; indeed, I believe that the mind of the British public was more profoundly moved by the exodus of Jumbo, than it would be were one of them to become the scene of some startling catastrophe. This is the more curious, inasmuch as, putting aside all sentimental considerations, which indeed seem to be out of harmony with the age we live in: the trade done, even with such comparatively insignificant colonies as our South African possessions, amounts to a value of many millions of pounds sterling per annum. Now, as the preachers of the new gospel that hails from Birmingham and Northampton have frequently told us, trade is the life-blood of England, and must be fostered at any price. It is therefore surprising that, looking on them in the light of a commercial speculation, in which aspect (saith the preacher) they are alone worthy of notice, a keener interest is not taken in the well-being and development of the Colonies. We have only to reflect to see how great are the advantages that the Mother Country derives from the possession of her Colonial Empire; including, as they do, a home for her surplus children, a vast and varied market for her productions, and a wealth of old-fashioned loyalty and deep attachment to the Old Country—"home," as it is always called—which, even if it is out of date, might prove useful on emergency. It seems therefore, almost a pity that some Right Honourable Gentlemen and their followers should adopt the tone they do with reference to the Colonies. After all, there is an odd shuffling of the cards going on now in England; and great as she is, her future looks by no means sunny. Events in these latter days develop themselves very quickly; and though the idea may, at the present moment, seem absurd, surely it is possible that, what between the rapid spread of Radical ideas, the enmity of Ireland, the importation of foreign produce, and the competition of foreign trade, to say nothing of all the unforeseen accidents and risks of the future, the Englishmen of, say, two generations hence, may not find their country in her present proud position. Perhaps, and stranger things have happened in the history of the world, she may by that time be under the protection of those very Colonies for which their forefathers had such small affection.

The position of South Africa with reference to the Mother Country is somewhat different to that of her sister Colonies, in that she is regarded, not so much with apathy tinged with dislike, as with downright disgust. This feeling has its foundation in the many troubles and expenses in which this country has been recently involved, through local complications in the Cape, Zululand, and the Transvaal: and indeed is little to be wondered at....