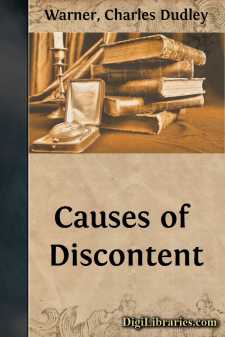 The Declaration of Independence opens with the statement of a great and fruitful political truth. But if it had said:—"We hold these truths to be self-evident: that all men are created unequal; that they are endowed by their Creator with certain inalienable rights; that among these are life, liberty and the pursuit of happiness," it would also have stated the truth; and if it had added, "All men are born in society with certain duties which cannot be disregarded without danger to the social state," it would have laid down a necessary corollary to the first declaration. No doubt those who signed the document understood that the second clause limited the first, and that men are created equal only in respect to certain rights. But the first part of the clause has been taken alone as the statement of a self-evident truth, and the attempt to make this unlimited phrase a reality has caused a great deal of misery. In connection with the neglect of the idea that the recognition of certain duties is as important as the recognition of rights in the political and social state—that is, in connection with the doctrine of laissez faire —this popular notion of equality is one of the most disastrous forces in modern society.

Doubtless men might have been created equal to each other in every respect, with the same mental capacity, the same physical ability, with like inheritances of good or bad qualities, and born into exactly similar conditions, and not dependent on each other. But men never were so created and born, so far as we have any record of them, and by analogy we have no reason to suppose that they ever will be. Inequality is the most striking fact in life. Absolute equality might be better, but so far as we can see, the law of the universe is infinite diversity in unity; and variety in condition is the essential of what we call progress—it is, in fact, life. The great doctrine of the Christian era—the brotherhood of man and the duty of the strong to the weak—is in sharp contrast with this doctrinarian notion of equality. The Christian religion never proposed to remove the inequalities of life or its suffering, but by the incoming of charity and contentment and a high mind to give individual men a power to be superior to their conditions.

It cannot, however, be denied that the spirit of Christianity has ameliorated the condition of civilized peoples, cooperating in this with beneficent inventions. Never were the mass of the people so well fed, so well clad, so well housed, as today in the United States. Their ordinary daily comforts and privileges were the luxuries of a former age, often indeed unknown and unattainable to the most fortunate and privileged classes. Nowhere else is it or was it so easy for a man to change his condition, to satisfy his wants, nowhere else has he or had he such advantages of education, such facilities of travel, such an opportunity to find an environment to suit himself. As a rule the mass of mankind have been spot where they were born. A mighty change has taken place in regard to liberty, freedom of personal action, the possibility of coming into contact with varied life and an enlarged participation in the bounties of nature and the inventions of genius. The whole world is in motion, and at liberty to be so. Everywhere that civilization has gone there is an immense improvement in material conditions during the last one hundred years.

And yet men were never so discontented, nor did they ever find so many ways of expressing their discontent. In view of the general amelioration of the conditions of life this seems unreasonable and illogical, but it may seem less so when we reflect that human nature is unchanged, and that which has to be satisfied in this world is the mind. And there are some exceptions to this general material prosperity, in its result to the working classes. Manufacturing England is an exception. There is nothing so pitiful, so hopeless in the record of man, not in the Middle Ages, not in rural France just before the Revolution, as the physical and mental condition of the operators in the great manufacturing cities and in the vast reeking slums of London. The political economists have made England the world's great workshop, on the theory that wealth is the greatest good in life, and that with the golden streams flowing into England from a tributary world, wages would rise, food be cheap, employment constant....