Cato A Tragedy, in Five Acts 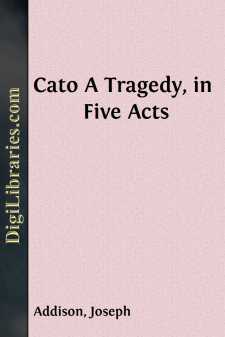 The author of this tragedy, to whose vigorous mind the English are indebted for their choicest moral works, came into the world with a frame so weak, that he was christened immediately on his birth, in consequence of the symptoms he gave of a speedy dissolution. The hand which reared him did a more than ordinary service to the age in which he lived, and to succeeding generations. Addison's pious writings, untainted by the rigour of superstition, have softened the harsh spirit of ancient religion, whilst they have confirmed all its principles.

He was the son of the Reverend Launcelot Addison, Rector of Milston, in the county of Wilts, at which place he was born, on the 6th of May, 1672.

After passing through some inferior schools, he was placed at the Charter-House; where he contracted that intimacy with Steele, which grew to a friendship honourable to them both, from its duration, and the instructions which their joint labour bestowed on mankind.

At the age of fifteen, young Addison was entered at Queen's College, Oxford, where he applied himself so closely to study, that, in a few years, his Latin poetry gained him high reputation in both universities, and, at the age of twenty-two, he became known to the nation at large by his English compositions.

He was now pressed by his father to take holy orders; which, notwithstanding his sedate turn of mind, and his habits of piety, he positively refused. Mr. Tickell has alleged, that it was Addison's extreme modesty, a constitutional timidity, which made him resolve against being in the church—but he became a statesman; and, surely, that is a character which requires as much courage as a clergyman's, when the church is not under persecution.

The first dramatic work from the pen of Addison, was an opera called "Rosamond," which having but indifferent success, he next assisted Steele in his play of "The Tender Husband;" for which the author surprised him by a dedication, openly to avow the obligation.

These two friends now united their efforts in that well-known periodical work, "The Spectator;" by which they reformed the manners, as well as the morals, of their readers, and established their own literary fame. But, as the talents of Addison were superior to those of Steele, so are the papers in this work which were written by him esteemed above the rest;—and, as a mark of distinction, he had the laudable, or his friend Steele the honest pride, to affix a letter at the end of every such paper, by which it should be known for his. The Muse Clio furnished the four letters which have been thus used in "The Spectator," as Addison's honourable stamp of authorship.

In the periodical work of "The Guardian" he had likewise some share; and, in 1713, he produced, what Dr. Johnson has called "the noblest work of Addison's genius"—"Cato."

Notwithstanding the merit of this play, it is certain that it was indebted to the political circumstances of the times, for that enthusiastic applause with which it was received by the town....