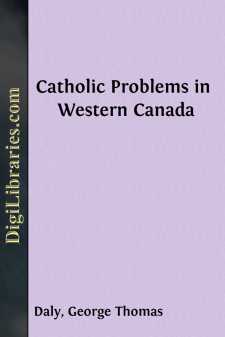 Problems characterize every age, sum up the complex life of nations and give them their distinctive features. They form that moral atmosphere which makes one period of history responsible and tributary to another. And indeed, in every human problem there is an ethical element. This imponderable factor, which often baffles our calculations, always remains the true, permanent driving force. For in the last analysis of human things, morality is what reachest furthest and matters most.

Problems may vary with the times and the countries, and yet, the moral issues involved never change; for, right is eternal. To detect this ethical element amid the ever restless waves of human activities has ever been the noble and constant effort of true leaders. Like the pilot they are ever watching for the lighted buoy on the tossing waves.

This moral element underlying all our national problems is what affects Catholics as such, or rather the medium through which Catholics are called to affect them. No period should prove more interesting to Catholics than our own, for the very principles of Christian Ethics are now being questioned and vindicated in the lives of nations, either by the benefits accruing from their application, or by the evils consequent upon their neglect.

Our neo-pagan world is learning by a cruel and sad experience that Religion is the foundation of morality, and morality that of true legality. "For unless certain things antecedent to conscience be granted and firmly held, 'conscience' becomes synonymous with 'sentiment.'"

Mr. Lloyd George himself, addressing a religious gathering in Wales on June 9, 1920, recognized Religion as the only bulwark able to resist the rising tide of anarchy. "Bolshevism is spreading throughout the world," said the British Premier, "and the churches can alone save the people from the disaster which will ensue, if this anarchy of will and aim continues to spread." The task of the churches, he continued, was greater than that which came within the compass of any political party. Political parties might provide the lamps, lay the wires and turn the current on to certain machinery, but the churches must be the power stations. If the generating stations were destroyed, whatever the arrangements and plans of the political parties might be, it would not be long before the light was cut off from the homes of the people. The doctrines taught by the churches are the only security against the triumph of human selfishness, and human selfishness unchecked will destroy any plans, however perfect, which politicians may devise.

This period of history, to quote Gladstone, is "an agitated and expectant age." The world is travelling fast into a new era. The modern social fabric, built on the shifting sands of selfishness and injustice is rocking on its foundations. Amid accumulated ruins nations are searching for the basic principles of true Reconstruction. This period of unrest is in itself a challenge to Christianity, to the Church....