Catalogue of Economic Plants in the Collection of the U. S. Department of Agriculture 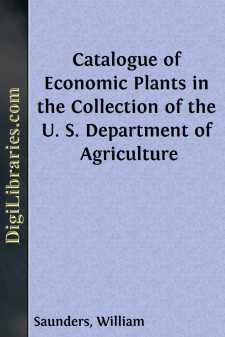 1. Abelmoschus moschatus.—This plant is a native of Bengal. Its seeds were formerly mixed with hair powder, and are still used to perfume pomatum. The Arabs mix them with their coffee berries. In the West Indies the bruised seeds, steeped in rum, are used, both externally and internally, as a cure for snake bites.

2. Abrus precatorius.—Wild liquorice. This twining, leguminous plant is a native of the East, but is now found in the West Indies and other tropical regions. It is chiefly remarkable for its small oval seeds, which are of a brilliant scarlet color, with a black scar at the place where they are attached to the pods. These seeds are much used for necklaces and other ornamental purposes, and are employed in India as a standard of weight, under the name of Rati. The weight of the famous Kohinoor diamond is known to have been ascertained in this way. The roots afford liquorice, which is extracted in the same manner as that from the true Spanish liquorice plant, the Glycyrrhiza glabra. Recently the claim was made that the weather could be foretold by certain movements of the leaves of this plant, but experimental tests have proved its fallacy.

3. Abutilon indicum.—This plant furnishes fiber fit for the manufacture of ropes. Its leaves contain a large quantity of mucilage.

4. Abutilon venosum.—This malvaceous plant is common in collections, as are others of the genus. They are mostly fiber-producing species. The flowers of A. esculentum are used as a vegetable in Brazil.

5. Acacia brasiliensis.—This plant furnishes the Brazil wood, which yields a red or crimson dye, and is used for dyeing silks. The best quality is that received from Pernambuco.

6. Acacia catechu.—The drug known as catechu is principally prepared from this tree, the wood of which is boiled down, and the decoction subsequently evaporated so as to form an extract much used as an astringent. The acacias are very numerous, and yield many useful products. Gum arabic is produced by several species, as A. vera, A. arabica, A. adansonii, A. verek, and others. It is obtained by spontaneous exudation from the trunk and branches, or by incisions made in the bark, from whence it flows in a liquid state, but soon hardens by exposure to the air. The largest quantity of the gum comes from Barbary. Gum senegal is produced by A. vera. By some it is thought that the timber of A. arabica is identical with the Shittim tree, or wood of the Bible. From the flowers of A. farnesiana a choice and delicious perfume is obtained, the chief ingredient in many valued "balm of a thousand flowers." The pods of A. concinna are used in India as a soap for washing; the leaves are used for culinary purposes, and have a peculiarly agreeable acid taste. The seeds of some species are used, when cooked, as articles of food. From the seeds of A. niopo the Guahibo Indians prepare a snuff, by roasting the seeds and pounding them in a wooden platter. Its effects are to produce a kind of intoxication and invigorate the spirits....