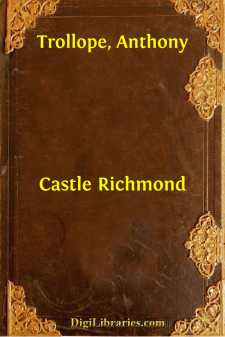 CHAPTER I. THE BARONY OF DESMOND.

I wonder whether the novel-reading world—that part of it, at least, which may honour my pages—will be offended if I lay the plot of this story in Ireland! That there is a strong feeling against things Irish it is impossible to deny. Irish servants need not apply; Irish acquaintances are treated with limited confidence; Irish cousins are regarded as being decidedly dangerous; and Irish stories are not popular with the booksellers.

For myself, I may say that if I ought to know anything about any place, I ought to know something about Ireland; and I do strongly protest against the injustice of the above conclusions. Irish cousins I have none. Irish acquaintances I have by dozens; and Irish friends, also, by twos and threes, whom I can love and cherish—almost as well, perhaps, as though they had been born in Middlesex. Irish servants I have had some in my house for years, and never had one that was faithless, dishonest, or intemperate. I have travelled all over Ireland, closely as few other men can have done, and have never had my portmanteau robbed or my pocket picked. At hotels I have seldom locked up my belongings, and my carelessness has never been punished. I doubt whether as much can be said for English inns.

Irish novels were once popular enough. But there is a fashion in novels, as there is in colours and petticoats; and now I fear they are drugs in the market. It is hard to say why a good story should not have a fair chance of success whatever may be its bent; why it should not be reckoned to be good by its own intrinsic merits alone; but such is by no means the case. I was waiting once, when I was young at the work, in the back parlour of an eminent publisher, hoping to see his eminence on a small matter of business touching a three-volumed manuscript which I held in my hand. The eminent publisher, having probably larger fish to fry, could not see me, but sent his clerk or foreman to arrange the business.

"It depends very much on the subject," said the foreman, with a thoughtful and judicious frown—"upon the name, sir, and the subject;—daily life, sir; that's what suits us; daily English life. Now your historical novel, sir, is not worth the paper it's written on."

I fear that Irish character is in these days considered almost as unattractive as historical incident; but, nevertheless, I will make the attempt. I am now leaving the Green Isle and my old friends, and would fain say a word of them as I do so. If I do not say that word now it will never be said.

The readability of a story should depend, one would say, on its intrinsic merit rather than on the site of its adventures. No one will think that Hampshire is better for such a purpose than Cumberland, or Essex than Leicestershire. What abstract objection can there then be to the county Cork?

Perhaps the most interesting, and certainly the most beautiful part of Ireland is that which lies down in the extreme south-west, with fingers stretching far out into the Atlantic Ocean....