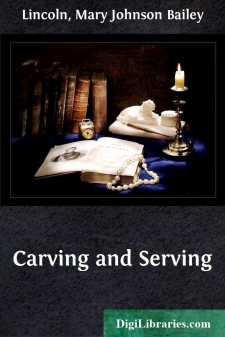 "Do you teach your pupils how to carve?"

"Please give us a lecture on carving; my husband says he will come if you will."

I have been so frequently addressed in this way that I have decided to publish a manual on the Art of Carving. Instruction in this art cannot be given at a lecture with any profit to my pupils or satisfaction to myself. One cannot learn by simply seeing a person carve a few times. As much as any other art, it requires study; and success is not attainable without much practice. There are certain rules which should be thoroughly understood; if followed faithfully in daily practice, they will help more than mere observation.

This manual is not offered as a guide for special occasions, company dinners, etc., nor for those whose experience renders it unnecessary, or whose means allow them to employ one skilled in the art. But it is earnestly hoped that the suggestions here offered will aid those who desire, at their own table in everyday home life, to acquire that ease and perfection of manner which, however suddenly it may be confronted with obstacles, will be equal to every occasion.

Printed rules for carving are usually accompanied with cuts showing the position of the joint or fowl on the platter, and having lines indicating the method of cutting. But this will not be attempted in this manual, as such illustrations seldom prove helpful; for the actual thing before us bears faint resemblance to the pictures, which give us only the surface, with no hint of what may be inside.

It is comparatively a slight matter to carve a solid mass of lean meat. It is the bones, tough gristle, and tendons, that interfere with the easy progress of the knife. To expect any one to carve well without any conception of the internal structure of what may be placed before him is as absurd as to expect one to amputate a limb successfully who has no knowledge of human anatomy.

Some notion of the relative position of bones, joints, fat, tough and tender muscles, is the first requisite to good carving. All agree that skill in carving may be acquired by practice; and so it may. Any one can divide a joint if he cut and hack at it long enough, and so learn after a time just where to make the right cut. But a more satisfactory way is to make a careful study before the material is cooked, and thus learn the exact position of every joint, bone, and muscle. Become familiar with a shoulder or a leg of mutton; locate the joints by moving the bones in the joints, or by cutting it into sections, some time when it is to be used for a stew. Or remove the bone in the leg by scraping the meat away at either end. Learn to distinguish the different cuts of meat. The best way to learn about carving poultry and game is to cut them up for a stew or fricassee, provided care be taken not to chop them, but to disjoint them skilfully.

Then, when you attempt to carve, do the best you can every time. Never allow yourself to be careless about it, even should the only spectators be your wife and children....