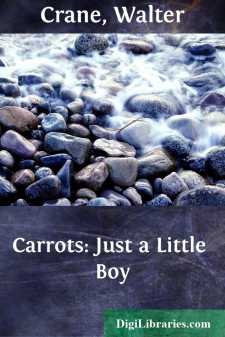 CHAPTER I.FLOSS'S BABY. "Where did you come from, Baby dear?Out of the everywhere into here? "But how did you come to us, you dear?God thought about you, and so I am here!"

His real name was Fabian. But he was never called anything but Carrots. There were six of them. Jack, Cecil, Louise, Maurice, commonly called Mott, Floss, dear, dear Floss, whom he loved best of all, a long way the best of all, and lastly Carrots.

Why Carrots should have come to have his history written I really cannot say. I must leave you, who understand such things a good deal better than I, you, children, for whom the history is written, to find out. I can give you a few reasons why Carrots' history should not have been written, but that is about all I can do. There was nothing very remarkable about him; there was nothing very remarkable about the place where he lived, or the things that he did, and on the whole he was very much like other little boys. There are my no reasons for you. But still he was Carrots, and after all, perhaps, that was the reason! I shouldn't wonder.

He was the baby of the family; he had every right to be considered the baby, for he was not only the youngest, but very much the youngest; for Floss, who came next to him, was nearly four years older than Carrots. Yet he was never treated as the baby. I doubt if even at the very outset of his little life, when he was just a wee pink ball of a creature, rolled up in flannel, and with his funny curls of red hair standing crisp up all over his head, I doubt, if even then, he was ever called "baby." I feel almost sure it was always "Carrots." He was too independent and sensible to be counted a baby, and he was never fond of being petted—and then, too, "Carrots" came so naturally!

I have said that Carrots loved his sister Floss better than anybody or anything else in the world. I think one reason of this was that she was the very first person he could remember in his life, and a happy thing for him that it was so, for all about her that there was to remember was nice and good and kind. She was four years older than he, four years old, that is to say, when he first came into the world and looked about him with grave inquiry as to what sort of a place this could be that he had got to. And the first object that his baby-wise eyes settled upon with content, as if in it there might be a possible answer to the riddle, was Floss!

These children's father and mother were not very rich, and having six boys and girls you can quite easily imagine they had plenty to do with their money. Jack was a great boy at school when Carrots first joined the family party, and Cecil and Louise had a governess. Mott learnt with the governess too, but was always talking of the time when he should go to school with Jack, for he was a very boy-ey boy, very much inclined to look down upon girls in general, and his sisters in particular, and his little sister Floss in particularest. So, till Carrots appeared on the scene, Floss had had rather a lonely time of it, for, "of course," Cecil and Louise, who had pockets in all their frocks, and could play the 'March of the Men of Harlech' as a duet on the piano, were far too big to be "friends to Floss," as she called it. They were friendly and kind in an elder sisterly way, but that was quite a different sort of thing from being "friends to her," though it never occurred to Floss to grumble or to think, as so many little people think now-a-days, how much better things would have been arranged if she had had the arranging of them.

There was only one thing Floss wished for very, very much, and that was to have a brother or sister, she did not much care which, younger than herself....