Captains of Industry or, Men of Business Who Did Something Besides Making Money 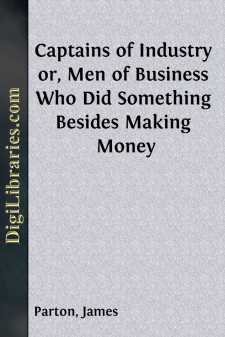 When a young man begins to think of making his fortune, his first notion usually is to go away from home to some very distant place. At present, the favorite spot is Colorado; awhile ago it was California; and old men remember when Buffalo was about as far west as the most enterprising person thought of venturing.

It is not always a foolish thing to go out into the world far beyond the parent nest, as the young birds do in midsummer. But I can tell you, boys, from actual inquiry, that a great number of the most important and famous business men of the United States struck down roots where they were first planted, and where no one supposed there was room or chance for any large thing to grow.

I will tell you a story of one of these men, as I heard it from his own lips some time ago, in a beautiful village where I lectured.

He was an old man then; and a curious thing about him was that, although he was too deaf to hear one word of a public address, even of the loudest speaker, he not only attended church every Sunday, but was rarely absent when a lecture was delivered.

While I was performing on that occasion, I saw him sitting just in front of the platform, sleeping the sleep of the just till the last word was uttered.

Upon being introduced to this old gentleman in his office, and learning that his business was to make hammers, I was at a loss for a subject of conversation, as it never occurred to me that there was anything to be said about hammers.

I have generally possessed a hammer, and frequently inflicted damage on my fingers therewith, but I had supposed that a hammer was simply a hammer, and that hammers were very much alike. At last I said,—

"And here you make hammers for mankind, Mr. Maydole?"

You may have noticed the name of David Maydole upon hammers. He is the man.

"Yes," said he, "I have made hammers here for twenty-eight years."

"Well, then," said I, shouting in his best ear, "by this time you ought to be able to make a pretty good hammer."

That was strong language. I thought, at first, he meant it as a joke; but I soon found it was no joke at all.

He had made hammers the study of his lifetime, and, after many years of thoughtful and laborious experiment, he had actually produced an article, to which, with all his knowledge and experience, he could suggest no improvement.

I was astonished to discover how many points there are about an instrument which I had always supposed a very simple thing. I was surprised to learn in how many ways a hammer can be bad.

But, first, let me tell you how he came to think of hammers.

There he was, forty years ago, in a small village of the State of New York; no railroad yet, and even the Erie Canal many miles distant. He was the village blacksmith, his establishment consisting of himself and a boy to blow the bellows.

He was a good deal troubled with his hammers. Sometimes the heads would fly off. If the metal was too soft, the hammer would spread out and wear away; if it was too hard, it would split.

At that time blacksmiths made their own hammers, and he knew very little about mixing ores so as to produce the toughest iron. But he was particularly troubled with the hammer getting off the handle, a mishap which could be dangerous as well as inconvenient.

At this point of his narrative the old gentleman showed a number of old hammers, such as were in use before he began to improve the instrument; and it was plain that men had tried very hard before him to overcome this difficulty.

One hammer had an iron rod running down through the handle with a nut screwed on at the end. Another was wholly composed of iron, the head and handle being all of one piece. There were various other devices, some of which were exceedingly clumsy and awkward....