Captains All and Others 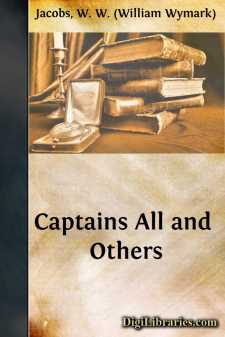 Every sailorman grumbles about the sea, said the night-watchman, thoughtfully. It's human nature to grumble, and I s'pose they keep on grumbling and sticking to it because there ain't much else they can do. There's not many shore-going berths that a sailorman is fit for, and those that they are—such as a night-watchman's, for instance—wants such a good character that there's few as are to equal it.

Sometimes they get things to do ashore. I knew one man that took up butchering, and 'e did very well at it till the police took him up. Another man I knew gave up the sea to marry a washerwoman, and they hadn't been married six months afore she died, and back he 'ad to go to sea agin, pore chap.

A man who used to grumble awful about the sea was old Sam Small—a man I've spoke of to you before. To hear 'im go on about the sea, arter he 'ad spent four or five months' money in a fortnight, was 'artbreaking. He used to ask us wot was going to happen to 'im in his old age, and when we pointed out that he wouldn't be likely to 'ave any old age if he wasn't more careful of 'imself he used to fly into a temper and call us everything 'e could lay his tongue to.

One time when 'e was ashore with Peter Russet and Ginger Dick he seemed to 'ave got it on the brain. He started being careful of 'is money instead o' spending it, and three mornings running he bought a newspaper and read the advertisements, to see whether there was any comfortable berth for a strong, good-'arted man wot didn't like work.

He actually went arter one situation, and, if it hadn't ha' been for seventy-nine other men, he said he believed he'd ha' had a good chance of getting it. As it was, all 'e got was a black eye for shoving another man, and for a day or two he was so down-'arted that 'e was no company at all for the other two.

For three or four days 'e went out by 'imself, and then, all of a sudden, Ginger Dick and Peter began to notice a great change in him. He seemed to 'ave got quite cheerful and 'appy. He answered 'em back pleasant when they spoke to 'im, and one night he lay in 'is bed whistling comic songs until Ginger and Peter Russet 'ad to get out o' bed to him. When he bought a new necktie and a smart cap and washed 'imself twice in one day they fust began to ask each other wot was up, and then they asked him.

"You're a liar," ses Sam, without turning round.

Sam didn't say nothing, but he kept fidgeting about as though 'e'd got something on his mind. Fust he looked out o' the winder, then he 'ummed a tune, and at last, looking at 'em very fierce, he took a tooth-brush wrapped in paper out of 'is pocket and began to clean 'is teeth.

"He is in love," ses Ginger, as soon as he could speak.

Sam made believe that he couldn't answer 'im because o' the tooth-brush, and arter he'd finished he 'ad such a raging toothache that 'e sat in a corner holding 'is face and looking the pictur' o' misery....