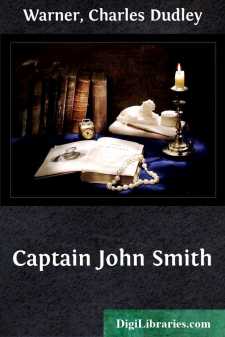 When I consented to prepare this volume for a series, which should deal with the notables of American history with some familiarity and disregard of historic gravity, I did not anticipate the seriousness of the task. But investigation of the subject showed me that while Captain John Smith would lend himself easily enough to the purely facetious treatment, there were historic problems worthy of a different handling, and that if the life of Smith was to be written, an effort should be made to state the truth, and to disentangle the career of the adventurer from the fables and misrepresentations that have clustered about it.

The extant biographies of Smith, and the portions of the history of Virginia that relate to him, all follow his own narrative, and accept his estimate of himself, and are little more than paraphrases of his story as told by himself. But within the last twenty years some new contemporary evidence has come to light, and special scholars have expended much critical research upon different portions of his career. The result of this modern investigation has been to discredit much of the romance gathered about Smith and Pocahontas, and a good deal to reduce his heroic proportions. A vague report of—these scholarly studies has gone abroad, but no effort has been made to tell the real story of Smith as a connected whole in the light of the new researches.

This volume is an effort to put in popular form the truth about Smith's adventures, and to estimate his exploits and character. For this purpose I have depended almost entirely upon original contemporary material, illumined as it now is by the labors of special editors. I believe that I have read everything that is attributed to his pen, and have compared his own accounts with other contemporary narratives, and I think I have omitted the perusal of little that could throw any light upon his life or character. For the early part of his career—before he came to Virginia—there is absolutely no authority except Smith himself; but when he emerges from romance into history, he can be followed and checked by contemporary evidence. If he was always and uniformly untrustworthy it would be less perplexing to follow him, but his liability to tell the truth when vanity or prejudice does not interfere is annoying to the careful student.

As far as possible I have endeavored to let the actors in these pages tell their own story, and I have quoted freely from Capt. Smith himself, because it is as a writer that he is to be judged no less than as an actor. His development of the Pocahontas legend has been carefully traced, and all the known facts about that Indian—or Indese, as some of the old chroniclers call the female North Americans—have been consecutively set forth in separate chapters. The book is not a history of early Virginia, nor of the times of Smith, but merely a study of his life and writings. If my estimate of the character of Smith is not that which his biographers have entertained, and differs from his own candid opinion, I can only plead that contemporary evidence and a collation of his own stories show that he was mistaken....