Captain Bayley's Heir: A Tale of the Gold Fields of California 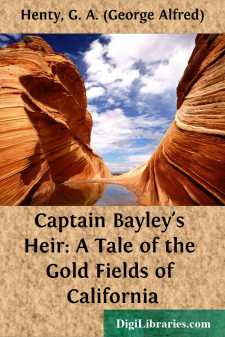 CHAPTER I. WESTMINSTER! WESTMINSTER!     CRIPPLE boy was sitting in a box on four low wheels, in a little room in a small street in Westminster; his age was some fifteen or sixteen years; his face was clear-cut and intelligent, and was altogether free from the expression either of discontent or of shrinking sadness so often seen in the face of those afflicted. Had he been sitting on a chair at a table, indeed, he would have been remarked as a handsome and well-grown young fellow; his shoulders were broad, his arms powerful, and his head erect. He had not been born a cripple, but had been disabled for life, when a tiny child, by a cart passing over his legs above the knees. He was talking to a lad a year or so younger than himself, while a strong, hearty-looking woman, somewhat past middle age, stood at a wash-tub.

"What is all that noise about?" the cripple exclaimed, as an uproar was heard in the street at some little distance from the house.

"Drink, as usual, I suppose," the woman said.

The younger lad ran to the door.

"No, mother; it's them scholars a-coming back from cricket. Ain't there a fight jist!"

The cripple wheeled his box to the door, and then taking a pair of crutches which rested in hooks at its side when not wanted, swung himself from the box, and propped himself in the doorway so as to command a view down the street.

It was indeed a serious fight. A party of Westminster boys, on their way back from their cricket-ground in St. Vincent's Square, had been attacked by the "skies." The quarrel was an old standing one, but had broken out afresh from a thrashing which one of the older lads had administered on the previous day to a young chimney-sweep about his own age, who had taken possession of the cricket-ball when it had been knocked into the roadway, and had, with much strong language, refused to throw it back when requested.

The friends of the sweep determined to retaliate upon the following day, and gathered so threateningly round the gate that, instead of the boys coming home in twos and threes, as was their wont, when playtime expired, they returned in a body. They were some forty in number, and varied in age from the little fags of the Under School, ten or twelve years old, to brawny muscular young fellows of seventeen or eighteen, senior Queen's Scholars, or Sixth Form town boys. The Queen's Scholars were in their caps and gowns, the town boys were in ordinary attire, a few only having flannel cricketing trousers.

On first leaving the field they were assailed only by volleys of abuse; but as they made their way down the street their assailants grew bolder, and from words proceeded to blows, and soon a desperate fight was raging. In point of numbers the "skies" were vastly superior, and many of them were grown men; but the knowledge of boxing which almost every Westminster boy in those days possessed, and the activity and quickness of hitting of the boys, went far to equalise the odds.

Pride in their school, too, would have rendered it impossible for any to show the white feather on such an occasion as this, and with the younger boys as far as possible in their centre, the seniors faced their opponents manfully....