by A. G. (Alfred Greenwood) Hales 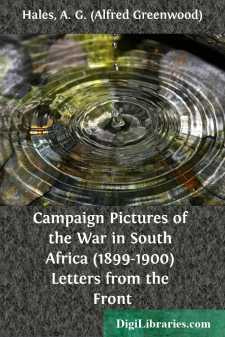 AUSTRALIA ON THE MARCH. BELMONT BATTLEFIELD.

At two o'clock on the morning of Wednesday, the 6th of the month, the reveille sounded, and the Australians commenced their preparations for the march to join Methuen's army. By 4 a.m. the mounted rifles led the way out of camp, and the toilsome march over rough and rocky ground commenced. The country was terribly rough as we drove the transports up and over the Orange River, and rougher still in the low kopjes on the other side. The heat was simply blistering, but the Australians did not seem to mind it to any great extent; they were simply feverish to get on to the front, but they had to hang back and guard the transports.

At last the hilly country faded behind us. We counted upon pushing on rapidly, but the African mules were a sorry lot, and could make but little headway in the sandy tracks. Still, there was no rest for the men, because at intervals one of Remington's scouts would turn up at a flying gallop, springing apparently from nowhere, out of the womb of the wilderness, to inform us that flying squads of Boers were hanging round us. But so carefully watchful were the Remingtons that the Boers had no chance of surprising us. No sooner did the scouts inform us of their approach in any direction than our rifles swung forward ready to give them a hearty Australian reception. This made the march long and toilsome, though we never had a chance to fire a shot. At 5.30 we marched with all our transports into Witteput, the wretched little mules being the only distressed portion of the contingent.

At Witteput the news reached us that a large party of the enemy had managed to pass between General Methuen's men and ourselves, and had invested Belmont, out of which place the British troops had driven them a few weeks previously. We had no authentic news concerning this movement. Our contingent spread out on the hot sand at Witteput, panting for a drop of rain from the lowering clouds that hung heavily overhead. Yet hot, tired, and thirsty as we were, we yet found time to look with wonder at the sky above us. The men from the land of the Southern Cross are used to gorgeous sunsets, but never had we looked upon anything like this. Great masses of coal-black clouds frowned down upon us, flanked by fiery crimson cloud banks, that looked as if they would rain blood, whilst the atmosphere was dense enough to half-stifle one. Now and again the thunder rolled out majestically, and the lightning flashed from the black clouds into the red, like bayonets through smoke banks.

Yet we had not long to wait and watch, for within half an hour after our arrival the Colonel galloped down into our midst just as the evening ration was being given out. He held a telegram aloft, and the stillness that fell over the camp was so deep that each man could hear his neighbour's heart beat. Then the Colonel's voice cut the stillness like a bugle call. "Men, we are needed at Belmont; the Boers are there in force, and we have been sent for to relieve the place....