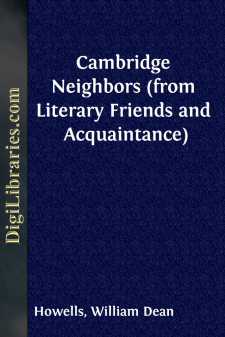 Being the wholly literary spirit I was when I went to make my home in Cambridge, I do not see how I could well have been more content if I had found myself in the Elysian Fields with an agreeable eternity before me. At twenty-nine, indeed, one is practically immortal, and at that age, time had for me the effect of an eternity in which I had nothing to do but to read books and dream of writing them, in the overflow of endless hours from my work with the manuscripts, critical notices, and proofs of the Atlantic Monthly. As for the social environment I should have been puzzled if given my choice among the elect of all the ages, to find poets and scholars more to my mind than those still in the flesh at Cambridge in the early afternoon of the nineteenth century. They are now nearly all dead, and I can speak of them in the freedom which is death's doubtful favor to the survivor; but if they were still alive I could say little to their offence, unless their modesty was hurt with my praise.

One of the first and truest of our Cambridge friends was that exquisite intelligence, who, in a world where so many people are grotesquely miscalled, was most fitly named; for no man ever kept here more perfectly and purely the heart of such as the kingdom of heaven is of than Francis J. Child. He was then in his prime, and I like to recall the outward image which expressed the inner man as happily as his name. He was of low stature and of an inclination which never became stoutness; but what you most saw when you saw him was his face of consummate refinement: very regular, with eyes always glassed by gold-rimmed spectacles, a straight, short, most sensitive nose, and a beautiful mouth with the sweetest smile mouth ever wore, and that was as wise and shrewd as it was sweet. In a time when every other man was more or less bearded he was clean shaven, and of a delightful freshness of coloring which his thick sunny hair, clustering upon his head in close rings, admirably set off. I believe he never became gray, and the last time I saw him, though he was broken then with years and pain, his face had still the brightness of his inextinguishable youth.

It is well known how great was Professor Child's scholarship in the branches of his Harvard work; and how especially, how uniquely, effective it was in the study of English and Scottish balladry to which he gave so many years of his life. He was a poet in his nature, and he wrought with passion as well as knowledge in the achievement of as monumental a task as any American has performed. But he might have been indefinitely less than he was in any intellectual wise, and yet been precious to those who knew him for the gentleness and the goodness which in him were protected from misconception by a final dignity as delicate and as inviolable as that of Longfellow himself.

We were still much less than a year from our life in Venice, when he came to see us in Cambridge, and in the Italian interest which then commended us to so many fine spirits among our neighbors we found ourselves at the beginning of a life-long friendship with him. I was known to him only by my letters from Venice, which afterwards became Venetian Life, and by a bit of devotional verse which he had asked to include in a collection he was making, but he immediately gave us the freedom of his heart, which after wards was never withdrawn. In due time he imagined a home-school, to which our little one was asked, and she had her first lessons with his own daughter under his roof. These things drew us closer together, and he was willing to be still nearer to me in any time of trouble. At one such time when the shadow which must some time darken every door, hovered at ours, he had the strength to make me face it and try to realize, while it was still there, that it was not cruel and not evil. It passed, for that time, but the sense of his help remained; and in my own case I can testify of the potent tenderness which all who knew him must have known in him....