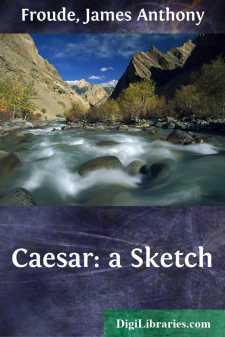 To the student of political history, and to the English student above all others, the conversion of the Roman Republic into a military empire commands a peculiar interest. Notwithstanding many differences, the English and the Romans essentially resemble one another. The early Romans possessed the faculty of self-government beyond any people of whom we have historical knowledge, with the one exception of ourselves. In virtue of their temporal freedom, they became the most powerful nation in the known world; and their liberties perished only when Rome became the mistress of conquered races, to whom she was unable or unwilling to extend her privileges. If England was similarly supreme, if all rival powers were eclipsed by her or laid under her feet, the Imperial tendencies, which are as strongly marked in us as our love of liberty, might lead us over the same course to the same end. If there be one lesson which history clearly teaches, it is this, that free nations cannot govern subject provinces. If they are unable or unwilling to admit their dependencies to share their own constitution, the constitution itself will fall in pieces from mere incompetence for its duties.

We talk often foolishly of the necessities of things, and we blame circumstances for the consequences of our own follies and vices; but there are faults which are not faults of will, but faults of mere inadequacy to some unforeseen position. Human nature is equal to much, but not to everything. It can rise to altitudes where it is alike unable to sustain itself or to retire from them to a safer elevation. Yet when the field is open it pushes forward, and moderation in the pursuit of greatness is never learnt and never will be learnt. Men of genius are governed by their instinct; they follow where instinct leads them; and the public life of a nation is but the life of successive generations of statesmen, whose horizon is bounded, and who act from day to day as immediate interests suggest. The popular leader of the hour sees some present difficulty or present opportunity of distinction. He deals with each question as it arises, leaving future consequences to those who are to come after him. The situation changes from period to period, and tendencies are generated with an accelerating force, which, when once established, can never be reversed. When the control of reason is once removed, the catastrophe is no longer distant, and then nations, like all organized creations, all forms of life, from the meanest flower to the highest human institution, pass through the inevitably recurring stages of growth and transformation and decay. A commonwealth, says Cicero, ought to be immortal, and for ever to renew its youth. Yet commonwealths have proved as unenduring as any other natural object:

Everything that grows  Holds in perfection but a little moment,  And this huge state presenteth nought but shows,  Whereon the stars in silent influence comment....