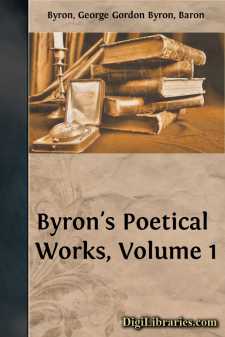 The text of the present issue of Lord Byron's Poetical Works is based on that of 'The Works of Lord Byron', in six volumes, 12mo, which was published by John Murray in 1831. That edition followed the text of the successive issues of plays and poems which appeared in the author's lifetime, and were subject to his own revision, or that of Gifford and other accredited readers. A more or less thorough collation of the printed volumes with the MSS. which were at Moore's disposal, yielded a number of variorum readings which have appeared in subsequent editions published by John Murray. Fresh collations of the text of individual poems with the original MSS. have been made from time to time, with the result that the text of the latest edition (one-vol. 8vo, 1891) includes some emendations, and has been supplemented by additional variants. Textual errors of more or less importance, which had crept into the numerous editions which succeeded the seventeen-volume edition of 1832, were in some instances corrected, but in others passed over. For the purposes of the present edition the printed text has been collated with all the MSS. which passed through Moore's hands, and, also, for the first time, with MSS. of the following plays and poems, viz. 'English Bards, and Scotch Reviewers'; 'Childe Harold', Canto IV.; 'Don Juan', Cantos VI.-XVI.; 'Werner'; 'The Deformed Transformed'; 'Lara'; 'Parisina'; 'The Prophecy of Dante'; 'The Vision of Judgment'; 'The Age of Bronze'; 'The Island'. The only works of any importance which have been printed directly from the text of the first edition, without reference to the MSS., are the following, which appeared in 'The Liberal' (1822-23), viz.: 'Heaven and Earth', 'The Blues', and 'Morgante Maggiore'.

A new and, it is believed, an improved punctuation has been adopted. In this respect Byron did not profess to prepare his MSS. for the press, and the punctuation, for which Gifford is mainly responsible, has been reconsidered with reference solely to the meaning and interpretation of the sentences as they occur.

In the 'Hours of Idleness and Other Early Poems', the typography of the first four editions, as a rule, has been preserved. A uniform typography in accordance with modern use has been adopted for all poems of later date. Variants, being the readings of one or more MSS. or of successive editions, are printed in italics [as footnotes. text Ed] immediately below the text. They are marked by Roman numerals. Words and lines through which the author has drawn his pen in the MSS. or Revises are marked 'MS. erased'.

Poems and plays are given, so far as possible, in chronological order. 'Childe Harold' and 'Don Juan', which were written and published in parts, are printed continuously; and minor poems, including the first four satires, have been arranged in groups according to the date of composition. Epigrams and 'jeux d'esprit' have been placed together, in chronological order, towards the end of the sixth volume. A Bibliography of the poems will immediately precede the Index at the close of the sixth volume.

The edition contains at least thirty hitherto unpublished poems, including fifteen stanzas of the unfinished seventeenth canto of 'Don Juan', and a considerable fragment of the third part of 'The Deformed Transformed'. The eleven unpublished poems from MSS. preserved at Newstead, which appear in the first volume, are of slight if any literary value, but they reflect with singular clearness and sincerity the temper and aspirations of the tumultuous and moody stripling to whom "the numbers came," but who wisely abstained from printing them himself.

Byron's notes, of which many are published for the first time, and editorial notes, enclosed in brackets, are printed immediately below the variorum readings. The editorial notes are designed solely to supply the reader with references to passages in other works illustrative of the text, or to interpret expressions and allusions which lapse of time may have rendered obscure.

Much of the knowledge requisite for this purpose is to be found in the articles of the 'Dictionary of National Biography', to which the fullest acknowledgments are due; and much has been arrived at after long research, involving a minute examination of the literature, the magazines, and often the newspapers of the period.

Inasmuch as the poems and plays have been before the public for more than three quarters of a century, it has not been thought necessary to burden the notes with the eulogies and apologies of the great poets and critics who were Byron's contemporaries, and regarded his writings, both for good and evil, for praise and blame, from a different standpoint from ours. Perhaps, even yet, the time has not come for a definite and positive appreciation of his genius....